Bugs, The Beatles and staying relevant 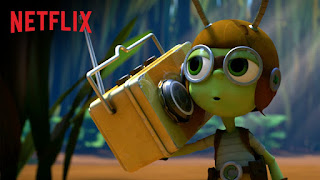 When my daughter was about three we took her to see her first “rock” concert – a local singer/songwriter who writes and performs music for kids. He’s kind of a big deal in central Jersey, performing in schools, at libraries, town festivals etc. On the drive home, we asked her what she thought of the show.


“He sings very good songs,” she said. “Especially that one about the sun.”


He does write and sing very good songs – clever songs, about a boy named Roy G. Biv and the rainbow, a Zebra named Zibby, and Ellie the elephant who gets bullied. His songs are a few cuts above the usual fare that gets categorized as kids’ music. But that day, he happened to include a cover of “Here Comes the Sun” by the Beatles in his set and that’s the song that stood out to my child.


I’ll leave that observation right there for the moment.


When we first decided to blog about staying relevant, I began wondering what exactly that means to a YA author. Is “relevant” code for “young” or “youthful”? Do authors of adult fiction or picture book writers worry about their age and whether or not they have enough knowledge and insight about the cultural touchstones of their audiences?


There are quite a few rules surrounding YA fiction, especially contemporary YA romance, which is what I write. For instance, the love triangle is a big “no,no”. Wish I had gotten that memo. Was being relevant one more thing I needed to be mindful of during the conception phase of a project?


Then I started thinking about music. In my mind, I’m always drawing parallels between music and writing. Classical musicians, opera singers, and to some extent country artists probably aren’t all that worried about staying relevant. This is just a guess on my part; I have no hard evidence to back it up. But it’s quite possible that rock, pop, and rap stars do worry about whether their music will literally strike a chord with young people. They’re writing and performing the music of now and with each year that passes by, while it might be possible to keep their old fans, it probably becomes increasing difficult to reach the next generation of teens. I once read an interview with Bono in which he said he’d stop making music when he thought he was no longer relevant. To that I would say, relevant to whom? To me? A lifelong fan who grew up with U2? Their music will always be relevant to me but mention the band to my daughter and she’s like “U Who?”


So then I started thinking that maybe relevance is relative and I still had not idea what to blog about.


But then this morning I turned on the news and saw there’s going to be a new animated series on Netflix based on the music of the Beatles. It’s called Beat Bugs and despite not being part of its intended audience, I’ll be tuning in. Did I mention James Corden, Pink, and Eddie Vedder will all be voicing characters?


That brings me back once again to Paul, John, Ringo and George and the day my toddler decided that the Fab Four trumped Zibby the zebra. She loved “Here Comes the Sun” and not because it was being sung by a cartoon grasshopper. So what is it about the Beatles’ music that makes it relevant to a three year old?


It’s everything my fellow authors here on YAOTL lines have been saying all month.


It’s about creating characters that embody “the truth of the life experiences and values real people have,” like Bill said.


It’s about remembering who we once were, like Holly said.


It’s about authenticity and digging deeper, like Joy said.


It’s about transcending a time and place, like Alissa said.

It's about being original and staying open, like Kim and Patty said.

It's about connecting with your audience, like Cat said.


It's about knowing all this and at the same time not letting it get in the way when it's time to sit down and write.