One. On an evening when I was in sixth grade, my then-single mom had a date. This was a not-uncommon occurrence, and not something I’d ordinarily remark upon. Previously, she’d been seeing a man named Danny, but they’d broken up. On this evening in particular, before they went out, she and her new fellow were in the living room talking, and I was somewhere else in the apartment doing whatever I was into in those days. Almost certainly reading.

At some point, I went into the kitchen because I hadn’t eaten in at least ten minutes (sixth grade, remember), and from there I could see into the living room—which featured a sliding glass door onto our little patio. We lived on the ground floor, and as I watched, Danny came charging onto the patio and threw himself against the door.

Good news: it was strong glass. Bad news: Danny figured that out pretty quick. In what seemed like an instant, he’d rounded the apartment building and kicked open our merely wooden front door. He saw me first, grabbed me by the neck and dragged me to my room and closed me in. He told me he’d kill me if I came out.

I knew Danny—I believed him.

Two. The day after the November election, a friend’s son who happens to be trans was bullied mercilessly at school by pro-Trump students who told him things like, “I can’t wait till they put you in a camp,” and “We’ll cremate you before you die so you get an advance taste of Hell.” There was more, but you get the idea. The bullying continued on Thursday, to the point his parents agreed to let him stay home on Friday, with plans to meet with the school administration the next week.

But we live in a connected world, and over the weekend the bullies found him on social media. His folks had urged him to stay offline for a while, but he’d gone on anyway. Twitter and Facebook and other social media platforms are now how we stay in touch with our friends and our communities, and he needed to make that connection. But those platforms are also run by soulless techno-libertarians who think mass threats of rape and murder are sacred free speech. By Saturday evening, it had all become too much for my friend’s son, and he tried to kill himself. 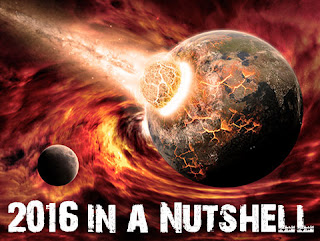 Three. Last Wednesday, I was at a weekly gathering of writers that started during NaNoWriMo. We talked about the loss of Carrie Fisher and Debbie Reynolds, and in general what a garbage fire 2016 had been. (In fairness I read a lot of great books last year, and the Cubs did finally break their curse, and I really loved Rogue One.)

A few bright spots notwithstanding, at our gathering the talk covered a lot of what we lost in 2016, and how much ugliness had risen to the surface. We went on to cover the need to prepare for the worst in the year to come. “I feel like I need to go full prepper,” one said. “Canned goods, bottled water, the works. Heaven knows we won’t be able to count on the police when everything goes to hell.” Another added, “I don’t have kids, and the way things stand, I don’t plan to.”

So 2016 was a dumpster fire, and I’m not alone in worrying that 2017 is going to be worse. But I guess we can be grateful the Grim Reaper can only take Alan Rickman, Prince, and Princess Leia once.

Four. We’re due, I think, for another handwringing thinkpiece about darkness in YA. These articles seem to hit at least once a season. “Why are all the parents drunks or abusive or dead? Why do the children swear so much? (My children never swear.) And, oh, I need my fainting couch, for the teen protagonist of a novel I heard about on the internet (but which I never actually read) drank beer and had sex.” These articles are tiresome in both their predictability and obliviousness to the actual world we live in. They seem to think if we don’t write about the ugly side of life, it won’t actually happen. “Children don’t need to know about that.”

Five. In the movie version of the The Green Mile, Paul Edgecomb says to Percy Wetmore, “Percy, you go make a report to the warden for me. Start off by saying the situation is under control—it's not a story, he won't appreciate you drawing out the suspense.”

I did not follow Paul’s orders in this post; I stuck you with cliffhangers up above. So let me just say right here the situation is under control. I’m one of the lucky ones. Yes, as a kid I was beaten by adults in my life more times than I can count. I was also groomed for months and then sexually assaulted by one of my high school teachers—and spent years believing I’d brought it on myself. But I got through it. Sure, I’ll always have scars, but I’m fine.

And my friend’s son, the one who was bullied at school until he tried to take his own life, is fine—for now, at least. He survived his attempt, and he has parents who love him and will work very hard to help him. He may still live in a society that hates him, and which feels emboldened in its hate by the outcome of our last election. But there’s hope: because of his parents, and his friends.

And, I’d like to believe, because of us. We know that children live in the same world we do, and pretending that ugliness isn’t there won’t protect them from it, but will only make them feel more alone and desperate and hopeless when they don’t fit inside some tiny, arbitrary box declared “normal” or “acceptable.”

Books save. Books with swearing and sex and garbage adults save, because those books are always about so much more. Scolds may throw their thinkpiece hissy fits, but kids need to see themselves and their stories—no matter how ugly—because it helps them know they’re not alone. It helps them see a possible way through.

That evening when Danny closed me in my room, I did something terrifying—I climbed out my window and ran for help. I was sure if he caught me he really would kill me, but I found the courage, I think, at least partly because of books. Real life had been working overtime to teach me I was alone, but because of the stories I read, I knew that wasn’t true.

But I will make a suggestion. Share your stories. Stay connected. Take whatever little steps you’re able. Protect yourself. And remember you’re not alone.
Posted by Bill Cameron at 4:00 AM