It Isn't Walking Away, It's Learning to Fly--By Kimberly Sabatini

This month our prompt was to post a picture and blog about what it means to us.

I take a ton of photographs. And I'm getting old-ish.
So, there was a lot to choose from.

As I found myself looking through massive amounts of pictures, I discovered they sparked a million things I wanted to say.

But I had to pick one.

Then I noticed a trend in my picture taking.

It involved numerous snapshots of my children. Their backs were to me and in most of those pictures, my boys were walking away. 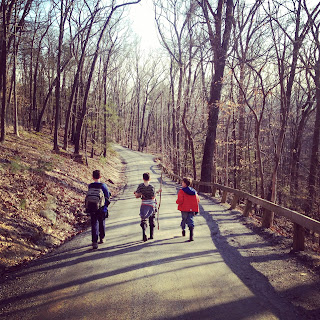 This caused me to stop and wonder why I took so many pictures of them from behind.
And why I gravitate to the visual.
Clearly, these were some of my favorite photos.

Perhaps, it's because, one day, not so far into the future, my boys will grow up and head out on their own adventures, doing things they are passionate about.
Things that are independent of me.

And I love that.

It gives me a tremendous amount of satisfaction to know I'm raising kids who feel confident enough (most of the time) to forge ahead, without looking back over their shoulders.

It's not that I want them to walk away and forget me.
It's my job to be influential.
And my desire to be important in their lives.

But deep in my soul, I believe their freedom will not interfere with the relationships we are constantly cultivating with each other.

Am I scared they could get hurt, or make stupid mistakes if I'm not vigilant in my protection?
That fear is real--very real.
But, it's a demon I can't allow to take control.

The truth is, we have as good of a chance of destroying a life, by holding on too tightly, as we do of never having embraced it at all.

It was never about choosing one aspect of my life over another.

I was simply attempting to become complete.

When I see my boys moving forward, it's that knowledge that makes me want to snap their pictures and capture the moments when they spread their wings.

Independence isn't walking away, it's learning to fly...

We can't control what happens in their lives, but we can control our ability to remember what it feels like to be on the verge--to be a young adult.

Email ThisBlogThis!Share to TwitterShare to FacebookShare to Pinterest
Labels: balance, fly, growing up, KImberly Sabatini, post a picture, walking away