On DNA and Other Cruelties by Patty Blount

Somebody recently pointed out that the heroines in almost all of my novels are the anti-Patty. To a large extent, this is true. Julie in SEND, Bailey in TMI, Grace in SOME BOYS, Amanda in NOTHING LEFT TO BURN -- all blue eyed blondes.

In temperament, Grace is a warrior. I don't fight. I don't confront. I just fade away.
Amanda is a natural leader. I failed miserably as president of a non-profit org and resigned less than two months into the role.

I gave this considerable thought and have to admit, I hate the way I look. Yeah. I'm that girl, the one who's got every flaw catalogued and indexed. This is why I chose this picture -- one I made of scans of old pictures. 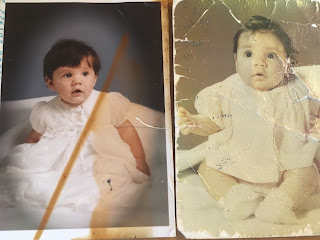 The one on the left is my youngest son and the one on the right is me. Both of us are four months old at the time.

During both of my pregnancies, I’d hoped each baby would inherit his aunt’s blue eyes, his grandfather’s perfect teeth, his cousin’s blond hair, his grandmother’s perfectly formed nose. In other words, all the features I lacked.

Instead, Christopher was born looking so much like me, I actually cringed. It was like a cruel joke...I grew up hating my appearance and now had to watch my beloved child do the same thing? I had so much hair at birth, the nurses tied a gauze bow in it to keep it out of my eyes. Chris's first haircut was done at four weeks old with me propping up his head. We have the same expressions. The same coloring. Even the shape of our ears is the same.

I remember holding him minutes after his birth, counting fingers and toes, feeling his tiny heart beat under my hand. And I remember this sort of shock hit me hard -- shock because I thought he was the most beautiful being ever created, and that somehow, I'd made him that way. This was a monumental realization... I'm a person who has dozens of flaws catalogued and cross-indexed but I don't see them in him.

He looks just like me. So if he is beautiful, that had to mean...so am I.

I don't know why this stunned me. I don't even know why it matters. It's a silly hang-up to have, really. But I did. I still do to a very large extent. But now, twenty-two years later, I think this boy is absolutely beautiful (they both are!).

Bonus shot: Here's one of both of my sons, taken on New Year's Eve. (with Rob's girlfriend, Catherine): 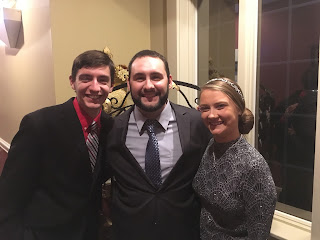