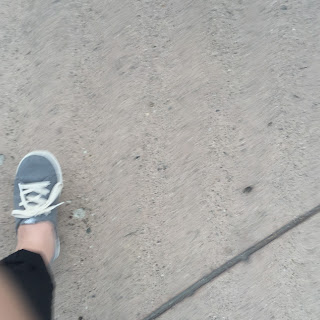 I took this photo last summer just after San Diego Comicon ended. My friends and I had taken the ferry over to Coronado Island to catch dinner and watch the sunset. It's a bit of a tradition for us. At some point I took this photo by accident, only finding it later after I got home and synced my phone to my computer.

I like this photo because it shows me walking.

Just a couple of months before I took this photo, I faced a health crisis that made me question if I'd lose my ability to walk altogether. I'd taken an antibiotic called Levaquin that, among other things, had attacked my joints and tendons, causing me incredible pain and limiting my mobility. When I realized the drug had poisoned me, one of my first thoughts was, I guess I won't be going to SDCC this year.

The con exhausted me even more than usual. But I did it and I have this photo as a reminder.