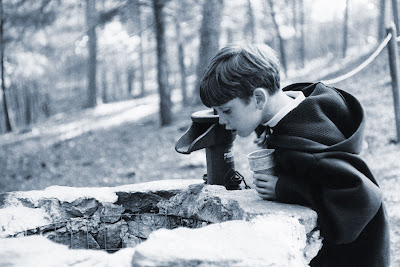 See that little guy right there? That’s me, age uncertain, but probably five or six. Of all the photos of me, that one is my favorite. (To be sure, most photos of me fill me with existential horror, but that’s another matter.)

Both options are plausible. I lived in Savannah from age five to seven—and at least one visit to Stone Mountain took place during that time, according to multiple sources. But I was born and mostly raised in Ohio. Even during our sojourn to Georgia, we visited family in Ohio a couple of times.

So which was it? Who knows? Cameras didn’t have geotagging in 1969.

And honestly, I like the uncertainty. I believe we find stories in the gaps. The gaps in my own history represented by this photo are intriguing to me. What was going on in that moment? What story is the picture telling?

What was I looking for? A fallen scoop of ice cream perhaps—unless I’d finished the ice cream already. If the ice cream had fallen into the well, I don’t seem too upset about it. Perhaps I haven’t noticed yet. Or perhaps I’m so caught up in the possibilities of what might be at the bottom of that well I haven’t yet realized my ice cream is gone.

Or maybe there never was any ice cream. Poor, sad, little Billy, no ice cream for him—but here’s a empty cone to snack on. Enjoy, kid!

But I don’t think I’m sad in that photo. I think I’m caught up in wonder. That open well suggests a wealth of possibility. Any kind of tale you might want to tell could start in this moment. I think that’s what I like about this photo most of all.
Posted by Bill Cameron at 4:00 AM