CRANKING UP THE HEAT IN YOUR YA ROMANCE (HOLLY SCHINDLER) 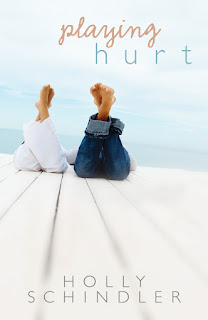 My YA sports romance PLAYING HURT’s pretty steamy. Meaning, it’s got its share of titillating passages. But in all honesty, I’ve always felt what made it hot wasn’t the physical attraction or love scenes—it was actually the intensity of my characters’ connection.
So for those looking to build heat in their current romance WIP, some thoughts:

Shared love. I’m not talking about the characters’ love for each other here. Instead, Chelsea and Clint in PLAYING HURT share a love of sports. (Chelsea’s a former basketball player, Clint a former hockey star.) It givse them sort of similar personality traits (they’re both competitive, for example). They get each other. In real life, that forges a bond. It can on the page, too.

Similar paths. Notice I said “former” when talking about Chelsea and Clint. They’ve both endured some tragedies, and have had to deal with the loss of their passions (and the way they define themselves). They not only have a shared love, but they also share similar pasts. AND: that means they’re both currently still on the same path of finding new purpose and healing. (I actually think the healing subplot’s the strongest in the book.) Being on a similar journey also intensifies the connection.

They’re the only person that can—well—kick each other in the rear. Chelsea and Clint are both sort of at a crossroads. Neither one has quite figured out what a post-sports life means for them. Neither one of them has truly gotten over the events that pulled them away from sports in the first place. Who else to better help them figure it all out than someone who knows exactly what they’re going through? As the book progresses, Chelsea and Clint endure the usual love story push and pull, but in the end, through their love story, they wind up teaching each other there’s still plenty of life left to live—plenty of triumphs and good times left to be had.

In the end, then, Chelsea and Clint have both an emotional and psychological connection. They understand each other in a way no one else ever could. I’m willing to bet that had I included the same physical passages verbatim, not changing a single word, but hadn’t included that connection, those love scenes just wouldn’t have had the same punch—wouldn’t have been nearly as steamy.
Really, though, that’s what makes romance so satisfying to me—being along for the ride as two characters forge an intense, life-altering intensity.
Email Post