There, I said it. Sue me. Threaten me with libel. I see all these flip-flop and sun hat and fruity drink themed items appear every year, and I am filled with a feeling of deep loathing.

My mom says that when I was a baby and she tried to take me outside even covered up and in the shade, I screamed and screamed until she took me in. I probably saved her from skin cancer, so you're welcome, Mom.

I was born and raised in South Carolina—a subtropical climate—among people who had been South Carolinians for over 300 years, so you'd think we'd be genetically acclimated, and most of us were. But not me. 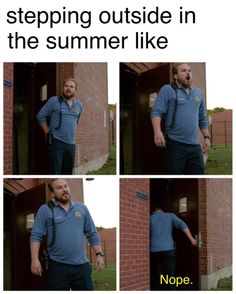 I hate the heat.

It turns out I may have a medical reason for this: I'm allergic to the sun.

When I was in Brazil at 17, I noticed these itchy little bumps all over. It happened again on my honeymoon in Hawaii at 24. At that point, I figured it was the tropical sun. I knew I burned easily, and I figured the tropical sun must be stronger.

Now, I am not one of those people with a serious illness who will die if exposed to the sun. But it does hurt, and it only really bothers me in summer, on those immensely hot days when the sun is beating down. Direct, strong sunlight is not my friend. (Read about my friend's theory that I am a vampire.)

Guess what? It gets hot in all those places, but it doesn't stay a bazillion degrees for days (and nights) on end like it does in South Carolina and even (South Carolinians will not believe this, but it's true) in Illinois, where I live now.

However, I've never spent a hotter summer than the one I spent in Montreal.

I got the worst sunburn of my life (2nd degree burns, no less) in Canada. It was the summer of 2010. Record-breaking heat in Montreal, where I was doing a French immersion month at UQàM to brush up on my French minor.

The first afternoon of the program, we did a walking tour of the city with this old man who wore black long sleeves and pants and a backpack and never broke a sweat. That night I realized my back was bleeding. I will hear "On va"—which  he said, mercilessly, a million times, as he dragged us all over that city—in my nightmares.

I had to go to the mall to buy shorts because I had stupidly listened to my husband's Upstate NY family—and my husband himself—who said it wouldn't be that hot (you know, not to someone from SC), and I thought they should know. Well, the joke was on them because they had to drive up and bring me fans from the Wal-mart across the border. Not that spending the day in Montreal is such a bad thing. Unless it's a bazillion degrees. I still remember someone saying something about getting poutine, and my husband's aunt fanning herself and protesting, "Non, non, en hiver seulement."

Those are still my favorite shorts, though, so something good came of it. I even patched them when they started wearing through last summer.

It was so hot in Montreal that people were scalping fans. People were using the underground sidewalks (designed for winter) to avoid the heat. I was living in a dorm on the sixth floor and my window opened about three inches and of course there was no air conditioning because it's Canada. 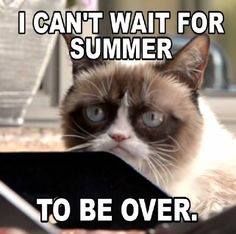 People seem to always want to have fun outside in the summer. Not me. I don't want to come to a pool party, or a picnic, or anything else that involves me under the blazing sun. I do not want to lie on the beach. It hurts, and it is boring. It is my own personal idea of hell.

I loved spending a month in Scotland last summer. It was rainy and overcast. Except for the part of the trip where it was insanely hot and I got sunburned. Looking at you, Staffa.

I'm a lot more fun in the fall.