I’m SO happy to join YAOTL!  This month’s theme, Summer Lovin’, sent my mind instantly to live music.  I’m addicted to it all summer long.


I live in Minneapolis, which may make you think “COLD.”  But our summers are glorious, and I spend as much time as possible outdoors, listening to music or playing sports.


My love of music started early.  I remember singing the Beatles’ “Help!” at age four into a microphone consisting of the handle of our stand-up vacuum cleaner.  My mom played Ella Fitzgerald, Billie Holiday, and Hoagy Carmichael nonstop.  I worked for three years during college in a Wisconsin bar that hosted country-rock bands.  When I wasn’t there, I spent many nights dancing in a disco bar a block away.  (No judgment.) 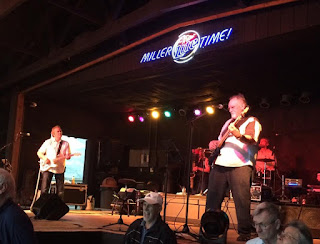 I was a total groupie of a couple of local country-rock bands, so after I went halfway across the country for law school, I came home every chance I could to hear them.  According to my mom, WAY too often.


Next thing I knew, though, I was married and practicing law ... and I left live music behind.  Years went by.  I missed it, but it didn’t fit with my life.  Then, 10 years ago, when two of my sibs died within months of each other, I reassessed everything.  Among the many changes I made, live music came roaring back into my life.  Soon, my son started playing drums and my daughter piano.  I started playing guitar.  I caught as much live music as I could, too, but mostly by driving to Wisconsin to hear the musicians I’d known in college.

Then my guitar fell by the wayside.  Life.


A year ago, I revisited the YA books I’d started writing several years ago.  The Bennet Sisters series, based on a modern collision with Pride and Prejudice, has a music theme that grows with each book in the series.  (All four books are now out.)  I started thinking about guitar again.  A friend asked me to join a band.  I swallowed hard (after first emphatically telling her “NO!”), joined the band, and got my guitars restrung. 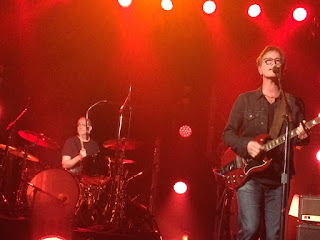 A new world opened.  I was playing in a band, yes, but I was also hanging out with people who play in bands ... and who listen to live music a LOT.  I started going to bars, nightclubs, and other live-music venues every chance I got.  Outdoor venues: even better!


I often walk to the Lake Harriet bandshell, which has live music most nights all summer.  I still drive to Wisconsin most weekends to hear the musicians I knew in college.  I follow the Belfast Cowboys wherever they play, much as I used to follow the Cadillac Cowboys during college.  I love standing in the “pit” at First Avenue, swaying to the music of Semisonic or Soul Asylum.  At the Dakota, I’ve swooned over Rodney Crowell, Martha Reeves and the Vandellas, and Pure Prairie League while enjoying great martinis.  (Another love. heh heh.)  The Minnesota State Fair offers 12 days of vast amounts of live music at the end of the summer.  And now I’m a regular on Tuesday nights at a neighborhood bar, the Driftwood, where St. Dominic’s Trio (a subset of the Belfast Cowboys) plays weekly.  No one has yet filed a restraining order against me.  All good.


For me, summer lovin’ is the magic of live music.  Had me a blast!
Posted by Mary Strand at 8:30 AM