The Summer Love That Stuck Around (Alissa Grosso)

I met my boyfriend on a summer day. Not just any summer day, mind you, but the hottest, most humid New Jersey summer day that ever existed. It was the kind of day, where if you moved just a fraction of an inch sweat would suddenly start pouring out of your body. I dressed in a cotton t-shirt and a loose linen skirt that I thought would help me to survive the sweltering day, but I was still a sweaty mess. Nerves might have had something to do with it.

This was not a "cute meet" as they say in the movies or any other sort of accidental meeting. This was an arranged meeting following a connection via an internet dating site and a series of emails. I was the one that suggested we meet up at a public park. At the time I was thinking about safety. I figured that if he did turn out to be some psychotic killer, which was, in my mind, statistically likely I should be safe in a public park with lots of other people around. It was a park kind-of, sort-of between where we both lived at the time, and my memory from the one other time I was there was that it was a nice place.

Of course, the one other time I was there it was a cooler fall day. I had never been there in the height of summer. I realized my mistake almost the moment I pulled into the parking lot. I had no trouble finding a spot, because the place was practically deserted. Where were all the strangers that were going to keep me safe from this potential psycho killer? "Abort! Abort!" the voice of reason screamed in my head. I was already sweating, profusely, but now I was sweating more profusely, which hadn't even seemed possible.

The parking lot was practically deserted, but not entirely deserted. There was another car there and there was someone in it with her bare feet hanging casually out her open window. So, that seemed pretty weird to me, and possibly it was some sort of omen.

I had arrived a few minutes early, and after a quick scan of the parking lot didn't think Ron (if that was even his real name!) was there yet. We had never exchanged information about the vehicles we drove, believe me, if he had asked that my psycho killer radar would have been pinging like crazy, so that's probably a good thing. Still, it meant we were left to guess at what each other would be driving. I knew that he owned an auto body shop (or so he claimed!) and so expected he might be driving something a bit flashy.

I should probably note here that based on past experiences with men, I had come to the conclusion that lies flowed from their lips in the same way that sweat was flowing out my pores as I got out of my car and began to scope out my surroundings and plot my escape route. A few minutes later a very, extremely nondescript pick-up truck pulled into the lot. I paid it no mind, though I was thankful that at least this park was becoming a little slightly less deserted.

While unbeknownst to me the guy I had been corresponding with online, was trying to figure out the best way to approach the bare feet hanging out the window, which he assumed must be mine. Thankfully, he decided instead to walk around and scope things out, and I caught a glimpse of him and recognized him from his profile picture. So, at least he hadn't used a fake picture.

After some initial hellos we decided to take a walk around the park. We talked about stuff, I think. Honestly, I don't remember. Because at this point there were a lot of screaming thoughts racing around my head. Stuff like "Why is no one at this park?" and "Is everything he said a lie? Is he lying right now?" and, of course, "Good thing I wore flats. Iit will help when he pulls out a gun and I need to make a run for it." I am told that I was able to hold a pretty normal conversation and didn't come across as a complete and total weirdo. So, that's good. 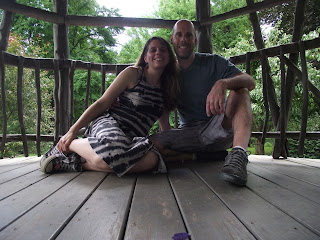 What's also good is that Ron (his actual name!) turned out to not be a psycho killer or a liar and was actually a really nice guy, though it would take me a few more dates before I let my guard down enough to realize that. He even looked past my extreme sweatiness on that first day, and to this day claims he didn't even notice it. So, okay, maybe he tells the occasional fib.

There were more than a few more dates. In fact, there's been 7 years and counting worth of dates including six more return trips to the park where we met on the anniversary of our first meeting, which, I would like to point out, has never been anywhere near as deserted at it was on that first date. The last time we were there for our anniversary there was an entire children's birthday party taking place at the park.

So, if you are a man who is meeting up with a woman you met via the internet, and you are wondering what she's thinking, she is more than likely thinking that you are a murderer and is mentally planning escape strategies. If you're a woman about to meet up with a man you met online he might be a murder and he might not, there's really no way to tell. What I can guarantee you is that no matter how safe and secure and public of a place you pick for a meeting spot as soon as you arrive it will immediately look like the setting of a horror movie, but rest assured that if you survive the date and there are many more to follow, you'll soon find the place to be charming and welcoming.

Alissa Grosso is the author of the books Shallow Pond, Ferocity Summer and Popular. She and Ron recently celebrated their seventh anniversary and released their first music single.  You can find out more about her at alissagrosso.com.
Posted by Alissa Grosso at 11:32 AM