This month’s theme of summer lovin’ got me thinking about all the many reasons I love summer. Now, I could reiterate all of the things others have said so far about the many joys unique to the summer season, but for me at least, it’s more than that. Summer is special to me for a few more
personal reasons.
I met my husband on a late summer day in September, the 12th to be exact, and we were married on that same day six years later. One of our sons was born in the summer on July 3rd. The cutest thing about that is, for the longest time, he thought the fireworks on the 4th were all for him and his birthday.
My other son was born on September 23rd, just after summer ends, but since we always celebrate it earlier before school goes back, his birthday has always felt like a summer one too.
And another big reason I love the summer would have to be our annual pilgrimage to the Outerbanks of North Carolina. The tradition began back in 1992 with our old college friends. The eight of us, four couples, had all gone to school in Pittsburgh – five of us to Carnegie Mellon, two of us to Duquesne, and one to University of Pittsburgh. Whenever I think of the eight of us, it reminds me of that line from St. Elmo’s Fire – “I can’t remember who met who first, or who fell in love with who first. All I can remember is the eight of us always together.” In the movie, they said seven, but who cares? Close enough, right? 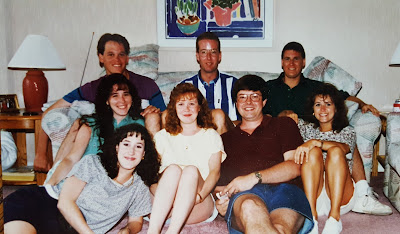 For two years in a row, we had gone back to Pittsburgh for alumni weekend at CMU for a get together, since that’s where we all met and met our spouses. But the last time we were there we decided we’d had enough of trying to relive our college years. Everyone seemed so young, and we were all now working professionals, so it just wasn’t our scene anymore. And that’s when Tom, one of our friends, made the best suggestion ever – why don’t we all go on a beach vacation instead of meeting back at school? The idea was brilliant.
So the next year, the four couples, the eight of us, went to the Isle of Palms in South Carolina. Now, I know what you’re thinking. I said the tradition was to go the Outerbanks. And it is. Because on the third year of beach vacation we decided South Carolina was a bit too far for all of us to travel and we would go slightly North to the Outerbanks. And we’ve been going ever since.
In the end, all four couples got married and now there’s seventeen of us – eight adults and nine children. Yes, God help us, the children now outnumber us. Our little group just keeps growing and expanding, and we all consider each other to be closer than family. The best part about our OBX vacation is that when the eight of us are back together, it’s like we never left each other’s side. We’re as close today as we were twenty-five years ago. And now, so are our kids. It’s something we hope we’ll never stop doing, though we’ve talked about the need for renting a second house once the kids start having kids. Thank goodness we have at least a few years before we have to think about that. 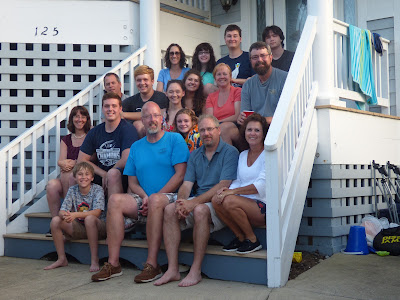 We have so many fond memories of our many beach vacations at OBX that it would take me a book to tell you all about them (something I plan to do one of these days), but here are a few highlights – morning jumps into the freezing pool, drinking something red and something blue, eating wings so hot they turned Tom’s face purple, surviving Hurricane Dennis only to be chased home by Hurricane Floyd, temporarily losing various children only to find them not too far from where we left them (one was hiding in a wardrobe and another had wandered out a gate), falling down broken beach stairs which led to the miraculous throw and catch of baby Danny, taking a tumble down the house stairs which resulted in a blown up ankle, wearing tin foil hats (don’t ask), whale watching, crab hunting, and drinking for lightning.
Anyone else have a summer vacation that has become a tradition?