The Evolution of “Success” (Brenda Hiatt)

“Success is simple. Do what’s right, the right way, at the right time.”  ~Arnold H. Glasow

Over the course of my writing career, my definition of success has evolved considerably. When I first began writing, I didn’t know any other writers. None lived near me, the internet barely even existed, and I wasn’t yet aware of any writing organizations. Given that, it’s not surprising that my early expectations about what success as a writer would mean were, um, less than realistic. Back then, I honestly believed that if I could just finish a book, then sell it to a publisher, fame and fortune would inevitably follow. (I can hear you all laughing now.)

Luckily, by the time I did finally sell a book (the second one I wrote), I’d discovered an online community of writers and had learned enough that I was thrilled, rather than disappointed, to receive an advance in the low four figures. (Yeah, not quite enough to buy that sweet villa on the Riviera I’d once dreamed of.) It was lovely having peers I could share my good news with and I positively basked in my success when I first saw a book I’d written myself on a bookstore shelf. All too soon, though, I fell into the deadly trap of comparing my own success with that of other authors.

“That some achieve great success, is proof to all that others can achieve it as well.” ~Abraham Lincoln

This quote sums up how I looked at other authors before I sold a book. If they could, I could. But after publishing a few books, I twisted an inspirational idea into something toxic: that one author’s great success was proof of my lack of success, because I hadn’t achieved the same recognition she had. With the hindsight of many years, I implore newer authors not to fall into that trap!

For a while, I considered giving up writing entirely because my so-called success looked so lame compared to that of other authors. At one point I did the math and realized that I’d make more money per hour waiting tables (a job I had in high school and college…and hated) than writing. After some serious soul-searching, though, I decided:

So I continued to write, since I enjoyed that more than anything else I could do for a living. But then my imprint folded and my subgenre more or less ceased to exist. I again considered giving up, but reminded myself that:

“Success is not final, failure is not fatal: it is the courage to continue that counts.” ~Winston Churchill

On the advice of other authors, I shifted from traditional Regencies to single title historical romance and found a new home at a new publisher, though I never became one of the “stars.” Unfortunately, after several more books written to increasingly tight deadlines and increasing rigid editorial standards, I gradually realized that I no longer loved writing. Between that and the contracting market, I stopped selling—and writing—altogether for a while. At that point, success—at least as a writer—seemed even more out of reach than before I’d sold my first book. However:

“Our greatest glory is not in never falling, but in rising every time we fall.” ~Confucius

Sure enough, after taking a year-long break I felt ready to try again, this time in a totally different genre (young adult sci-fi romance). And lo and behold, writing was fun again! By the time I finished my first YA, indie pubbing was becoming a thing and I’d already started selling some of my older historical romances that I’d gotten back the rights to. That’s the path I decided to take with my new books and I haven’t regretted it a bit. I may never be one of those seven-figure authors you hear about, but I like what I do and that’s good enough for me.
Therefore, my current definition of success is the one I hope will last me for the rest of my life:

“Success is liking yourself, liking what you do, and liking how you do it.” ~Maya Angelou

Easier said than done, of course, but I’m making progress! 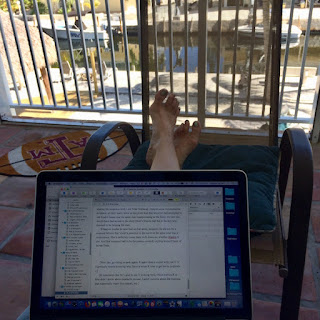