When I was a young man, I feared one thing. Well, two, really, until Roy Clark died. You see, most of my friends were smarter, more driven, and more talented that me. And I feared banality. I feared growing into a middle-aged man who had never achieved anything interesting or notable. I feared they would film one of my friend's life stories and I'd be cut from the script or be a composite character, based on several less-important people. I feared being forgotten. Being average. Being normal.

I think that's why writing helped me avoid a major midlife crisis. As an author, I get to meet other writers. And I'm no longer a fan. I'm a colleague.

I've always been a faithful member of my church. In 1998, I was in New York state for the end of the world celebrations (damn, I should have budgeted money for the trip back home). It was a gathering of a few hundred of the faithful of the One True Church. 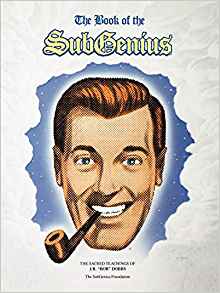 Eternal Salvation or Triple Your Money Back!

During the chaos that was the original X Day, I got to meet Rev. Ivan Stang, the founder of the Holy Church. I snapped this photo. 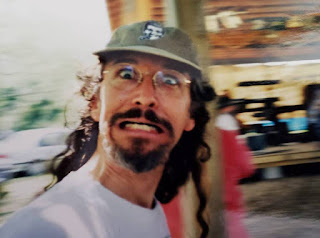 Years later, when my first books came out, I send him copies. As I always mention the One True Faith in my books, I thought that was good for some free shirts. He sent me the shirts and some nice words about the books, but our correspondence fell off shortly after.

The other day, out of the blue, he sent me an e-mail saying how he'd been busy with his family, but he finally got around to reading the books I sent and had really enjoyed them. He wrote me this wonderful blurb.

“I’m tempted to say I’ve been caught up in Brian Katcher’s novels, but that’s got to be an old line. But it’s true enough. He’s a natural storyteller with what must be a keen memory of his own youth, because he has expertly captured the world of insecure young men trying to act smart and be cool in several stories now. I dread when he starts exposing what it’s really like to be an insecure OLD man trying to act smart and cool. His male characters are so familiar that they embarrass me, and I’ve developed crushes on his females characters even though they’re way too young for me. If I’d been reading these instead of Kurt Vonnegut when I was younger, I would probably have had a much more realistic attitude…”

That may mean nothing to you heathens, but  to me, that's like getting the personal blessing of the Roman Pope.

But getting a blurb from the chief author of The Book of the Subgenius...yeah, that's also kind of awesome.