Interview with Cindy Rizzo, author of The Papercutter

Today, we're chatting with Cindy Rizzo, author of The Papercutter. Regular readers will know Cindy's a new regular blogger here at YAOTL. Her new novel is so fascinating and timely, I (Holly Schindler, blog administrator) wanted to talk to Cindy about it at greater depth: 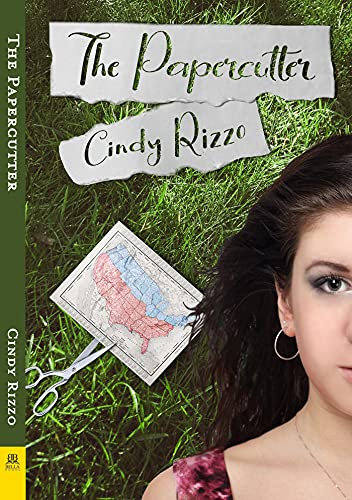 HS: First thing’s first—I always start by asking for an elevator pitch. Tell us about The Papercutter.

CR: The Papercutter is the first book in The Split trilogy.  Its three teenage narrators are members of the first generation to come of age after the United States has split into two countries: the United Progressive Regions and the God Fearing States.  All three teens are Jewish, two are Orthodox Jews living in the GFS where violent antisemitism is on the rise.  One of them, Jeffrey, is paired with an openly queer girl, Dani, in the UPR, through a pen pal program sponsored by the Jewish community. The third teen is Judith Braverman, the paper cutter, who has the gift of seeing the souls of people, knowing instantly if they are good or evil.

HS: I’m not sure I’ve read such an overtly political book in YA; frequently, it seems political issues are addressed through fantasy. How did you come to write The Papercutter?

CR: I read a lot about politics and the increasing polarization of the US, which seems to be getting worse and worse.  The Papercutter is in some ways a thought experiment--what would happen if the US actually split into two countries? How would it happen? What would it look like? Some people have told me they want that to happen.  I'm not so sure.

CR: I read a lot of YA and I've written two YA stories published in anthologies.  I wanted The Papercutter to reflect the views of a generation that never lived in a united USA.  Young people have always been the vanguard of social justice and resistance movements, as the teens in The Papercutter come to be. They are responding to these external threats at the same time that they are growing into their authentic selves, finding love, experiencing sex, and taking the kinds of creazy risks that teens are known for taking.  I really wanted to write about the intersection of those two challenges and character arcs.

HS: I was fascinated by the description of papercutting. I love that you link art and resistance movements. Can you tell us a bit about the artform, and why you felt it was important to include the art-resistance connection?

CR: Papercutting is an old Jewish art form that usually depicts Jewish symbols or scenes from the Bible. Judith learns early on that centuries ago, a rabbi cut letters into paper after his inkwell froze and he could not longer write with a pen.  Some examples of Jewish papercuts can be found here.

I wanted Judith, as a character, to be set apart from others in her community. Her art is at the center of her life, much more than school or romantic interests. Yet, she's also very committed to her faith but is confused about why she's been given this gift of seeing souls. Initially, the papercuts provided a great way for the teens in the GFS to hide messages, using the very complicated code that Judith and her friend Hannah invent.  Later on, Judith learns about the power of art in resistance movements, which gives her a unique role in the struggle against the GFS government.

HS: I also loved the depiction of the pen pals across the divide. It seemed a metaphor for how hard it is to reach out to someone of a different political affiliation. It’s one of my favorite aspects of the book. Can you talk a bit about how it became part of the story?

CR: The pairing of Dani and Jeffrey as pen pals was a way to connect two of my three main characters, and eventually the third.  Jeffrey had a reason to be part of the program--he wanted to move to the UPR.  Dani was persuaded to sign up by her brother who lives in the GFS and is related through marriage to the woman who heads up the program.  The two countries have negotiated a detente in an effort to avoid a war.  The Jewish Federation in the GFS creates the pen pal program in the spirit of detente to enable Jewish teens in the two countries to learn about one another.

HS: You’ve written at YAOTL about how plotting is harder for you than characterization. Plot is especially complicated when you’re working with a series. I’m such a junkie for plot strategies, I have to ask: How did you structure the plot of The Papercutter?

CR: The word "structure" as a verb is quite a kind description of what I did in writing The Papercutter.  Plot points come to me piecemeal and I then have to figure out how to connect them.  Then I have to make sure there's enough action and conflict so the book isn't just a character study.  The world I've created in the GFS is violent, so I knew some of that violence had to impact my characters, and of course it does.  The formation of the resistance happened somewhat organically as the personalities and qualities of the characters took shape.  Unlike Judith and Jeffrey, Hannah is brave and fearless.  Dvorah Kuriel becomes the mystical guide for the group, which made sense to me since she began in that role in her interactions with Judith.  And the metaphorical noose around the Jewish community in GFS tightens throughout the book, climaxing toward the end with the announcement that Judith and her family watch on television.

HS: You deal with so many additional issues, along with political polarization: issues of faith, issues related to the LGBTQ community, etc. Do you feel increased polarization heightens social issues?

CR: It can go either way.  If you are part of the oppressed group, you can either embrace your identity, perhaps in a way you hadn't before or you could run from it.  No matter what the external context, issues of sexuality and faith are very commonly confronted by teenagers as they work to figure out who they are as individuals.  I just read some excerpts from the diaries of Jewish teens living in Poland in the years leading up to the Holocaust when antisemitism was rampant, and it was surprising how much of what was in these diaries was about romantic longing, friendships and personal aspirations.  So teens tend to focus inward, no matter what is going on.

HS: What’s your own favorite part of The Papercutter?

CR: There are so many.  I guess it would be the pivotal scene in the church parking lot where two characters meet and the unexpected happens (trying not to spoil anything here).  I was relieved when my editor said that I made that scene believable.  But also, so many funny Jeffrey scenes about his love of food and how he and Hannah interact.  I could go on.

HS: What would you most like young readers to take from this series?

CR: That young people have a critical role to play in making the world a better place and that this has been true for generations.  Dvorah shares so many examples of this with  Judith and Jeffrey so that they understand that they can be part of something bigger.

HS: Can you give us a preview or a hint where book #2 will take us?

CR: Sure.  Book two opens when Judith attends the wedding of two hated characters and witnesses a heartwrenching confrontation between Isaac and his parents. This book tries to introduce some nuance into the polarized world with the introduction of the ARNE, the Automous Region of New England in the UPR, the home of principled conservatives who refused to settle in the GFS. There are some new characters I've included in the UPR as well.  But the book is very focused on Dani and her ongoing development.  There's more tragedy and more acts of courage and more art.  The tentiave title is The Border Crosser.

Keep up with Cindy at Facebook, Twitter (@cindyrizzo), or here at YA Outside the Lines. Be sure to snag a copy of The Papercutter.