Keeping the Conflict on the Page (Brenda Hiatt)

I’ve always felt, as both reader and writer, that good, strong conflicts are a necessary ingredient for good, strong stories. In fact, the bigger the conflict, the more satisfying the resolution tends to be. For that reason, I do my best to throw all kinds of obstacles at my poor characters that they’ll have to overcome to achieve their happy ending. Notice I said, “I do my best to,” not, “I like to.” That’s because in real life, I’ve always been very conflict-averse, and that aversion has a tendency to spill over into my writing when I’m not looking. This means my first drafts often don’t have enough conflict, so I have to go back during revisions to beef it up. Which I do, and the book is always better for it.

When it comes to life, though, I think conflict avoidance is usually a pretty good strategy, unless it’s a matter of standing up to a bully or righting a wrong. Since I don’t have many opportunities to do either on a day to day basis, especially as an introverted writer who doesn’t get out much, that makes steering clear of conflict relatively easy. Or at least it should. I realize this isn’t true for everyone, and it hasn’t always been true for me, either. There are people out there who absolutely thrive on conflict, to the point that if none is around for them to amplify, they’ll go out of their way to create some from scratch. We’ve all known at least a few of these “crazymakers” (as Julia Cameron calls them in The Artist’s Way), and if one happens to live in your house or next door, or is a close relative, conflict can become a regular part of your life whether you want it to or not. 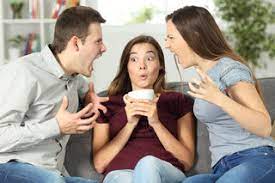 Friends are a little trickier. Sometimes it can be necessary to cut a certain crazymaker out of your life, or at least minimize your contact with them, for your own sanity. If your main contact is via social media—for example, that one Facebook “friend” who regularly posts stuff intended to stir up conflict—you can hide their posts, or at least “snooze” them for a while. They’ll never even know.

And then there are the crazymakers that way too many of us allow into our lives by choice. And yes, I’ve been guilty of this one myself: TV/cable “news” personalities. Over the past two or three years, I’ve come to realize that paying too much attention to the news cycle, particularly via media where a healthy dose of spin is often included, can be toxic. Crazymaker relatives may be hard to avoid, but we definitely have a choice when it comes to the ones in the media—or, as I’ve begun calling it, The Outrage Machine. Once I really thought about it, I realized that most media outlets, regardless of which way they “lean,” have a stake in keeping viewers (or readers) outraged. Outraged people keep watching and clicking, boosting ratings and driving up ad revenues. Worse, outrage is addictive, so we keep coming back for more. And the more we watch or read, the deeper the divisions in our country become. It’s an incredibly vicious cycle. My advice? Step away from The Outrage Machine.

Now that I’ve shifted to getting most of my news from carefully curated, text-based sources that report facts with an absolute minimum of spin, I’m a happier person. I also have a whole lot more time for the things that matter…like writing! These days I try very hard to only seek out conflict in fiction (especially my own), but not in real life. It’s a course I highly recommend.

Brenda Hiatt is the New York Times and USA Today bestselling author of the award-winning Starstruck series. She’s currently finishing up the first draft of the next book in that series, Unraveling the Stars, which should release in late 2021 or early 2022.