The Lone Ranger, Ed Sullivan and Stories That Slide Away

John Clark posting from Cody, Wyoming during a long delayed tour of the National Parks in Colorado, Wyoming, Montana, South Dakota, and Utah.

When the topic of what we fear was chosen, my first thought was of a couple events from more than 60 years ago that scared the hell out of me then and that I still remember quite vividly. The first was a radio episode of The Lone Ranger where he and Tonto were fighting ghosts. I was supposed to be in bed asleep, but my parents were listening in the next room and the program was so realistic, I had nightmares afterward. The other was at about the same time. It was a short animated feature shown on the Ed Sullivan Show. Talk about setting up an audience—He cautioned viewers that they might want to have their children leave the room. Now what kid, hearing that is going to want to miss what’s coming next? It was A Short Vision, a British animated film by Joan and Peter Foldes released in 1956. The film, inspired by one of Peter's poems, depicts the destruction of the world, including mankind. The film's music was composed by Matyas Seiber, who composed music for Animal Farm two years earlier.

https://upload.wikimedia.org/wikipedia/en/a/ae/The_mushroom_cloud_produced_by_It_%3B_from_A_Short_Vision.png That too, gave me nightmares.

Fortunately, one benefit of age is the ability to remember all the times you worried and fretted about bad stuff happening. Well 98% never does and you deal with the other 2%. However, there are a couple things that really scare me. The first is losing my sense of humor and quick wit. I’m the unofficial humorist and punster for the folks I swim with five mornings a week. If I’m not cracking a new joke, or creating a new pun within five minutes of getting in the water, someone will call me out. 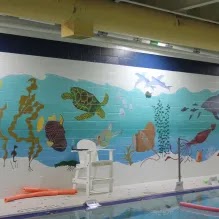 It’s worth noting that the heated pool is also my ‘Place of Power,’ a location where ideas and plot twists come to me in a seemingly effortless way. That brings me to my second fear—losing the ability to come up with new story ideas. Even if I couldn’t write them, the thought of not being able to have a story appear in my head and start writing itself is terrifying.