What is fear anyway? (PJ Sharon)

In honor of Halloween, this month’s theme is fear…as in, what are you afraid of? The answer to that question is more complicated than it appears on the surface.

Recognizing and then admitting our fears can leave us feeling vulnerable. It’s in our DNA to hide our deepest insecurities from others, lest they be used against us. Our subconscious is so wired this way, we even hide our fears from ourselves, often choosing to live in denial rather than face the awful truth that we are vulnerable in any way. Someone who suffers from anxiety is most likely dealing with unexplored and unresolved fear that so threatens their sense of themselves and their existence, they will suppress the awareness of it and allow it to manifest in destructive ways (panic attacks, high blood pressure, sleeplessness, etc.). It can be so deeply hidden from our conscious minds that we don’t even know what it is we are afraid of.

Excavating those fears can be a daunting, scary, and painful process, and one that far too few are willing to explore. I'd even venture to say, it's at the crux of many of our current mental health crises. Out of necessity, I've done much work on exploring this in myself over the years, so I’m happy to share my evolutionary journey with you in hope that I can help others get past stumbling blocks that keep you feeling stuck, isolated, and afraid. Here goes…

My fears have evolved over time. Like most children, my earliest fears were of monsters under the bed. Mummies, vampires, werewolves, and witches were the things that occupied my nightmares. Little did I know, they were simply a manifestation of fear of the invisible threats that life might possibly throw our way. My household was fraught with disfunction and uncertainty that I had no capacity to process or understand, so "unseen monsters" were a natural substitute for everything that was beyond my control. This is why we are innately terrified of the dark, of small spaces, and for some—even open spaces. They represent all the things we can’t control. Loss of control is a common denominator in the fears that follow us throughout our lives.

Spiders and snakes may pose a threat in terms of being poisonous, but their real creepiness is in their unpredictability. A tarantula could sit perfectly still across a room, and yet, we might run screaming from said room because in our minds, that spider might jump across the room and land on our face. Not going to happen, but we are convinced it’s possible and we aren’t taking the chance. Irrational fears have their basis in some small truth that gets twisted and exaggerated in our subconscious. The Alfred Hitchcock movie, "The Birds", had me terrified of seagulls at the beach through most of my young adult life, when logically, I knew that they might swoop down and steal my sandwich but weren't likely to peck out my eyes unprovoked.

As a teenager, I was plagued with terrible nightmares about being attacked, being chased, or being murdered. It took me years to uncover the truth behind those terrible dreams, despite a seemingly obvious connection to my mother having been diagnosed with cancer when I was twelve and watching her slowly succumb to the disease four years later. This unseen “monster” was attacking and killing my always strong and very tough mom right before my eyes and I was as powerless to stop it as she was. The world felt horribly unfair and unsafe to me. It doesn’t take a psychology degree to figure that one out, but it took me years in therapy before I recognized the underlying issue—fear of death, loss of control, helplessness, and even abandonment. And because I was wholly unaware of these underlying fears, they followed me into my adulthood.

Through college and single parenthood in my early twenties, I suffered anxiety attacks and insomnia. I feared someone breaking into my apartment and not being able to protect myself or my child. I feared not having enough money to keep a roof over our heads and food on the table. I feared being alone in my struggles because I had so little dependable support in my life at the time and didn’t feel I could ask for help because the rejection when someone said no was even worse. These weren't irrational fears, but they loomed so large I couldn't see beyond them. Over time, it became increasingly clear to me that all those fears were brought to life BECAUSE I was afraid. You know the old scripture from the book of Job; “The thing you fear the most will come upon you.” Because I couldn’t trust life or people, or even my own judgment, I felt I had no one to turn to. Because I feared I couldn’t provide for my child, I constantly struggled financially. My unwillingness to face my fears kept me mired in them, and blaming others for my plight kept me from taking the necessary responsibility for changing my circumstances.

When I finally sought counseling, parenting support groups, and began taking martial arts classes, I was slowly able to see how and why I had sabotaged my life. It took a few years, but eventually I stopped worrying about what someone would do to me and my child if they broke into my home and started thinking about what I would do to them, lol. Eventually, I was able to sleep, and the anxiety subsided. It took work, self-awareness, a willingness to look at the hard stuff, and a healthy dose of much-needed faith. Faith in God, the Universe, other people, and myself. It took risk and courage that felt somehow beyond my own strength, but every step I took in faith led me to a better life.

I’ve revisited my fears many times since those dark days. Asking myself what holds me back, what am I afraid of, and how do I confront it head on, so it doesn’t keep me stuck in a self-defeating pattern. The answer is often different depending on the circumstances. Sometimes it’s a fear of failure (or more likely for me, a fear of success), sometimes it gets back to those old insecurities of rejection or abandonment, but at its roots, any fears that come along these days to trip me up are usually grounded in loss of something or someone I love. I’ve lived the deep grief of losing people close to me too many times, and like a hand to a hot burner, I avoid facing that kind of devastation at all costs, even knowing that death and loss are an inevitable part of life.

To be clear, it’s not death itself I fear, since I’m a believer in the hereafter, but the fear of the unseen monster of unpredictability, and the knowledge that no matter what I do there will inevitably be pain—whether it comes from a slow, ugly demise, or losing those dearest to me and living a life of heartache without them. If I didn’t love so deeply, this wouldn’t be a problem. It turns out, loving deeply has a cost, and sometimes I catch myself holding back in relationships—unwilling to invest wholeheartedly or setting hardened boundaries around what I’m willing to give of myself. Living in “protection” mode, aka “survival” mode, may help me keep a wall in place that buffers me from the worst pain, but it also overshadows the fullness of joy that comes with living and loving with an open heart. A work in progress, to be sure!

Figuring out where my fear comes from is essential in helping me overcome it. It also helps me recognize when those fears are baseless. Spiders, snakes, bees, and such external threats are no longer terrifying to me and darkness doesn’t hold the same power it once did now that I know that the light resides within me. Don’t get me wrong; I hate small spaces, and these days, the spread of fascism and the death of democracy keep me up some nights, but taking action rather than giving in to paralysis or despair is what keeps me on track.

One last thing I will share is something I learned many years ago that has helped me deal with fear when it rears its ugly head again and again.

The definition of fear is believing what you cannot see will come to pass.

The definition of faith is believing what you cannot see will come to pass.

Choosing faith over fear will always bring you one step closer to peace and serenity. 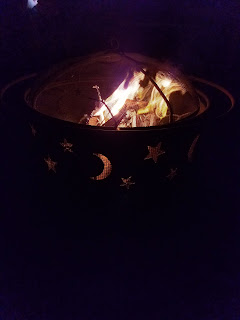