What scares me as a writer (Brenda Hiatt)

This month we’re talking about the things that scare us. I’m someone who can’t read or watch horror. My vivid imagination loves to replay those situations and images and make them even scarier—usually at three o’clock in the morning. But as a writer, my biggest fear has nothing to do with creepy things that go bump in the night.

No, what keeps me awake at night, and keeps me at my computer far longer than is probably healthy, is the fear that I’ll publish a book before it’s ready and disappoint my readers. Some would call this perfectionism, and I suppose it is, in a way. But really, it’s driven by fear. Fear that I’ll finally be exposed as a fraud. Fear that those readers who’ve been begging for my next book will think I cheated them by taking shortcuts. Fear that I’ll do my characters a disservice by not telling their stories properly.

This kind of fear is a two-edged sword. On the one hand, it drives me to produce the very best books I can, as close to perfect as I can possibly make them. But on the other hand, it makes me a much slower writer than I’d be otherwise. No matter how many times I revise, I’m always sure that one more pass will turn up new things to fix or improve (which is usually true). That means I have a really hard time declaring a book “done” and ready for public consumption. I still do it—I’ve now published twenty-five books and counting. But it’s never, ever, easy. Or fast.

Now that I’m indie publishing, with no all-powerful editor to prevent me from falling on my face in front of the whole reading world, that fear is even greater. Because now it’s all on me—and my freelance editor and beta readers—to decide whether a book is really, truly ready to see the light of day. I hear over and over that to be successful in the indie world, it’s important to produce books quickly. So I’ve spent way too many hours on workshops and books telling us how to write faster. But after trying various speed strategies, I’ve finally accepted that I’ll always be slow, at least by indie standards. And…I’m okay with that. Because my fear of releasing too infrequently isn’t nearly as strong as my fear of releasing a substandard book. That’s why more than a year will pass between the release of my last Starstruck book and the next one.

However! To bridge that gap, I wrote a “secret” Starstruck holiday novella, and in record time! It was secret because I didn’t trust myself to craft a publishable novella in time for the holidays, so didn’t dare risk disappointing my readers by mentioning it ahead of time. Fortunately, because it was an idea I’d been toying with for quite a while, the writing flowed much more quickly than I expected, allowing time for all the revisions and editing I consider absolutely crucial before letting it go.

Of course, that doesn’t mean I won’t be terrified when Yuletide Perils goes live, less than a month from now. I’m always terrified by new releases, positive that my beta readers, editor, and I have missed something crucial. But that’s a terror I’m used to by now. Over time, I’ve learned that the best way to get over that fear, once the final file is uploaded to all the vendors, is to turn my attention to the next book–in this case, polishing my January release to within an inch of its life. 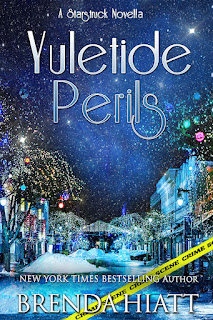