Giving it Away (Brenda Hiatt)

A year or two after I began indie publishing (after a longish career traditionally publishing), other, more experienced, authors advised me that an effective way to bring new readers to a series is to make the first book free. I hesitated for a really long time before trying that. It seemed so counter-intuitive to just give away my hard-earned work! Especially Starstruck, the first YA novel I ever wrote, since it took me the better part of three years to go from idea to publishable book. But when Starfall, the 4th (and, I thought at the time, last) book in the series was up for pre-order, I bit the bullet and set Starstruck free. 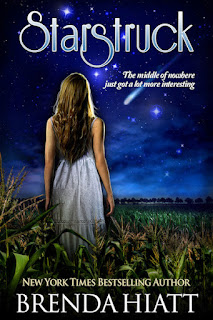 And…it worked! I advertised it everywhere I could, lots and lots of readers downloaded it, and a healthy percentage of them went on to buy the other books in the series. In fact, it worked so well that instead of putting a price back on the book after the fourth book released (as I originally planned), I left it free and periodically advertised it again. Each time, the whole series got another nice boost in sales.

Unfortunately, after a couple of years EVERYBODY apparently caught on to that strategy (and this was before the advent of Kindle Unlimited, which took “free” to a whole new level). These days, a permanently-free first book doesn’t do nearly as much to sell a series. Probably because by now, most ebook readers have so many freebies hoarded on their Kindles (or other devices), they never get around to reading most of them. Needless to say, if they never read that first book, they’ll never feel compelled to go online and buy the next book in the series, or the next.

Sigh. It was nice while it lasted.

Now that free downloads of Starstruck have dwindled to just a small handful per day, I’ve decided it’s finally time to start charging for it again. (Readers are more likely to read books they’ve actually paid for!) Since I have a new book in the series releasing in January, I’m using a slightly different strategy to lure in new readers: a (temporary) deep discount of the boxed set of the first 4 Starstruck books, from $14.99 to $1.99. 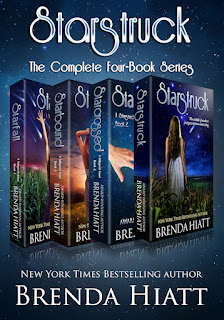 Meanwhile, I will continue to offer Starstruck for free…but only to newsletter subscribers. For everyone else, it’s going back to $3.99. Still a great price for a 110,000 word book I sweated over for three years, and that’s garnered several nice awards and lots of lovely reviews. And I’ll probably set it free occasionally in the future as a special promo.

Best practices change constantly in this crazy world of book publishing. All we can do as writers is pay attention and be ready to pivot when the next new thing comes along. Nearly any strategy is worth at least trying, to see how it works for a particular book, series or author. To find out, we just have to close our eyes, pinch our noses…and jump!

Brenda Hiatt is the New York Times and USA Today bestselling author of the award-winning Starstruck series. This week only, Starstruck: The Complete Four-Book Series is on sale for just $1.99 in advance of the January release of  Unraveling the Stars, currently available for pre-order.
Posted by Brenda Hiatt at 7:00 AM