For the first three months of this year, I'm going to post reviews of three YA books I've recently read, loved and highly recommend.  Each features diverse characters, not often enough encountered in the genre.

I begin this month with The Prophetess by Evonne Marzouk. 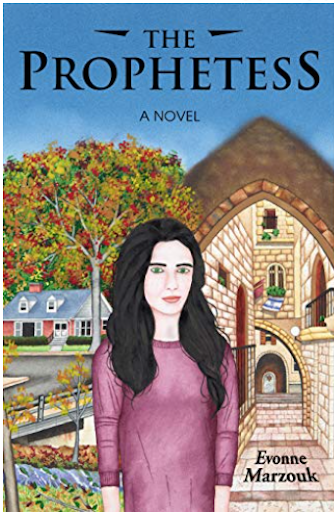 Why I loved this book.

There aren't many YA books that not only feature Jewish main characters but engage them with issues of faith.  This book does that and more.  It explores the mystical aspects of Judaism and also broadens its lens to include the ways in which people of faith across religious beliefs share similar values and commitments.  Plus, the writing is strong, the characters well drawn and intriguing, and some of the prose is quite beautifully crafted.

What the book is about.

Rachel is a high school senior in a Baltimore public school. While her family is Jewish, they aren't especially observant, except in situations, like holidays, out of respect for the Orthodox faith of Rachel's grandfather. When her grandfather dies early in the book, Rachel and her mother honor him and attend his Orthodox synagogue for Rosh Hashanah (Jewish New Year) and Yom Kippur (Day of Atonement) services.  It's at this synagogue that Rachel first sees an older Jewish man praying and feels drawn to him. The man, Yonatan, offers to help Rachel understand some strange flashes of light she's been seeing. Soon, he teaches her a form of Jewish meditation and the flashes of light become visions that she doesn't quite understand.

When she has the opportunity to travel to Israel with a youth group, it is there that Yonatan introduces her to a number of modern-day prophets and prophetesses, including the revered, elderly Devorah. As Rachel's connection to these prophets develops and her visions become more pronounced, she must make a decision about the direction of her future and her commitment to her faith.

Why I recommend this book.

How does an American teenager living a typical high school life reconcile a calling to her faith that she would never have expected? What does this mean for her long-time crush on her friend, Chris, a sweet boy who is a devoted Catholic? How can she explain these strange visions and her connection to Yonatan to her parents and her older sister, a ballet student who appears to be starving herself? What is Rachel's responsibility to her people and to her obligation to repair the world (tikkun olam)?

These are only some of the questions explored in The Prophetess. Along the way, Rachel has to make many small decisions culminating in one life-changing choice. One of her greatest allies is Chris, who not only quickly understands why they cannot move toward a romantic relationship, but who also accepts without question Rachel's experience of the visions and her need to follow a new path. Because Chris is steadfast in his own faith, he easily understands Rachel's need to be committed to hers.

There are many books where religion is set up to be a teen's nemesis, especially more highly observant religions with stricter rules and practices. The Prophetess is one of the few books that turns this on its head and claims faith as not only a positive choice but a life-affirming and joyous one. The book introduces readers to mystical and Orthodox Judaism as possible and understandable options for personal fulfillment.

The message of The Prophetess can be summed up by Rachel herself in the final pages of the book,

"I seemed to have left simple happiness behind months ago. What I had now was more complicated: a sense of purpose and meaning, a trust in something beyond myself. I had to believe I was doing the right thing, following my path where it led. When I focused on that, a deeper contentment seemed to resonate inside of me."