This is the Hill I'll Die On by Patty Blount

It's National Library MONTH here on the ol' blog. That's right. The rest of the world gives libraries a stingy week, but we're honoring libraries the whole month of April.

That seems fitting given the way books and libraries are coming under attack these days.

Libraries are safe havens where everyone can go to pursue learning, to read books they might otherwise not have access to, to research projects that matter to them. Libraries serve as community hubs, helping newcomers get acclimated to their new home towns, maybe learn the language, discover resources that are available. Libraries connect us.

But libraries are scary places to some people -- they blame books and the libraries that circulate them for  *clutches pearls* indoctrinating impressionable young minds into *gasp*...

*recovers from attack of vapors*

When I was an itty bitty Patty, the library was my first classroom. I learned magic lives between the covers of books. For children with vivid imaginations (like me!), the library opened up worlds with no limits. For children afraid of damn near everything (also me!), the library taught me that what's fearful is the unknown and by coming to know it through the safety of books, fear could be overcome.

One of the very first books I read was called KAREN, a biography of a young girl named Karen, living with cerebral palsy. It was a big door-stop of a book and well beyond my age at the time, but my mother helped me with the big words.

It was the first time a book's happy ending did NOT turn out perfect and that, I realized, made it somehow happier.

I discovered Judy Blume at my library when I wasn't even in my teens yet.

[Brief aside: I adore Judy Blume and she is the reason I published under my real name. I get to share shelf space with my favorite author!]

Judy's novel, DEENIE, was about a beautiful girl whose scoliosis diagnosis derails her dreams of modeling -- oops, HER MOTHER'S dream, I should say. Barely two months after reading this book, I learned I also have scoliosis. As I asked the pediatrician about surgery, exercises, and a back brace, his eyes practically fell out of his face. He asked my mother if I was a savant.

My mother said, "No. She has a library card."

See?? The library saved me from weeks of anxiety over a spinal condition that might have been terrifying had I not first read all about it.

When I was in high school, I suffered through heart-breaking loneliness when friends broke off into cliques. I spent every free period I had in the school's sunny two-story library, reading in a corner until the bell rang.

Now that I'm an adult still living (at least part time) in a teen world, it breaks my heart to see books being banned and librarians under attack for defending them. In a country that boasts of LIBERTY AND JUSTICE FOR ALL, how sad that so many of its citizens do not grasp how fascist it is to deny people the right to choose their own literature and how utterly subversive it is to hold librarians accountable for not removing offensive titles from circulation.

Some years ago, I had a conversation with a coworker about the 50 Shades of Grey series. Not a reader herself, this colleague mentioned her daughter just bought the book and she'd wondered if I'd read it. I had read it, back when it was still called Master of the Universe and posted on a Twilight Fan Fiction site.

I asked her how old her daughter was and whether she knew if she was sexually active or in a relationship. My friend laughed nervously and said, "Of course not! She's only fifteen."

I told her outright I would NOT let my fifteen-year-old daughter read EL James' books at this time and here's why:

Obvious next question -- DO I THINK THESE BOOKS BE BANNED IN SCHOOL LIBRARIES?
Absolutely not.
Parents have the right to control and manage their children's reading material but that right does not extend to my children or to your neighbor's children. Reading these novels could provide great lessons in recognizing toxic relationship warning signs and what NOT to condone or accept in real-life relationships. Reading such novels together could even provide positive experiences for parent and teen (once you overcome your laughter).
GONE, GIRL is another problematic novel and again, I would not remove it from libraries.
People are screaming to ban THE HATE U GIVE, THE KITE RUNNER, SPEAK --even my own SOMEONE I USED TO KNOW was banned in a Florida school district.
Some parents object to profanity while others are fine with that, but may object to violence. Still others may not agree with the stance a character takes. (In my adult romance, THE PARAMEDIC'S RESCUE, reviewers actually gave it one star because of the child-rearing advice one character gives to another!)
My point is that parents truly concerned about the content of books need to read those books themselves before they demand titles be removed from circulation. If more people did that, I assure you the furor over critical race theory would end because critical race theory has never been taught in public schools.
And...unless you also plan to ban that iPhone I'm sure your twelve-year-old has, your book-banning efforts are entirely wasted. With that iPhone, your child can access all manner of objectionable material including porno videos. All you're doing is guaranteeing that your child will find that problematic book and read it behind your back.
So stop blaming libraries for making books available. That's their job. It's parents' jobs to do the policing of the content.
And while you're at it, give Sachem Public Library a shout out from me. I spend quite a lot of time there and the librarians help me with my novel research. 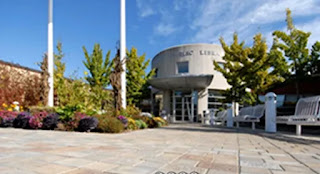 What, you thought we authors just use the internet?
*laughs*
The internet is great for basic research. But when it really matters, you need a good librarian to help you separate the wheat from the chaff. You need to find reputable sources, not Wikipedia. Personally, I find I also need help just phrasing the query correctly to yield desired results. The librarians at SPL have helped me with every book I've written to date, most recently, helping me with Dewey Decimal codes for a character who is a librarian herself and likes to categorize her entire life in Dewey.
I urge everyone to think of libraries as more than book collections. Libraries serve a crucial role in our communities. Our libraries are our most valuable resource. On this hill, I will die. Prove me wrong. I'll wait.