The Trapper Who Loved Dahlias

John Clark sharing memories about my favorite relative and times enjoyed with him and others in Somerset and Franklin Counties. My great uncle Leland Look was the baby of his family. He had four older sisters, Lillian, Lottie, Lucille, and my paternal grandmother, Della.

I was closer to that side of the family because they were Mainers, while my other grandparents, uncles, aunts and cousins all lived in upstate New York. I remember me and my two younger sisters riding in the back of our 1948 Dodge pick-up, passing over winding roads and going through downtown Waterville at night. Imagine the shock and horror if someone let their kids ride while standing up in the bed of a pick-up today. Back then, nobody even blinked.

We’d stay at my grandmother’s house in West New Portland, half a mile from the wire bridge that still spans the Carrabasset River on the way to Kingfield. My sisters and I loved sleeping on the screened in porch, watching fireflies blink about and listening to the occasional car passing on the road. My late grandfather was probably the last circuit riding and barter dentist in Maine. He had offices in the house, in Bingham, Kingfield and Rangeley. During the depression, he’d accept wild game, hides and firewood in exchange for dental work. I spend many hours in his long unused office and discovering interesting stuff in the attic. I still remember the sex manual I found when I was twelve. It was published around the turn of the century and even at my young age, I cracked up numerous times at all the euphemisms used to describe the sex act. 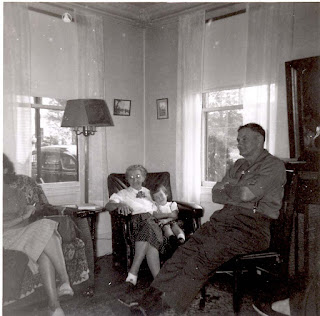 
Uncle Leland was a true renaissance man. He was postmaster in New Vineyard, Maine for forty years, cut and split his own firewood, trapped for until he was in his eighties, and raided dinner plate dahlias every year. They decorated the curving porch that wrapped around two side of the house where he and Aunt Ruby lived. Those flowers greeted thousands of people driving to and from Canada every year.

He and Ruby also had a camp on Porter Lake between New Vineyard and Strong. He, like me, loved to fish. He had a twelve foot canoe with an electric motor attached to one side. I don’t remember him ever returning from trolling Porter lake and being skunked. He caught more than his share of togue (lake trout). When I was in my twenties and had time off from my job at the large state hospital in Augusta, I’d often drive to New Vineyard and we’d fish the west branch of the Carrabasset for brook trout. In between bites, he’d share bits of family history and other fishing experiences with me.

Aunt Ruby had been married to an alcoholic before Leland and had emotional scars from the experience. As Leland put it one day while we were out fishing, “She’s hell on liquor.” Once in a while, he’d use our excursions to sneak a beer. 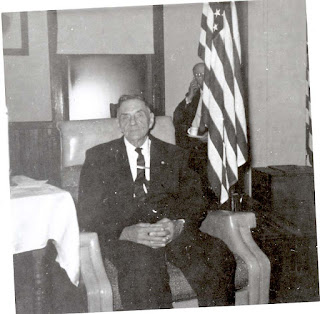 Uncle Leland at his retirement party from the post office


Even to this day, I’m not clear on the reasons, but Leland’s first wife, Rose died of breast cancer and Ruby took care of her near the end. That was how she and Leland met. His three children by Rose treated her terribly, even though I never heard an unkind word leave her lips. It was her and Leland’s welcoming love and kindness that keeps their memories fresh. I could stop in at ant time, day or night, and be greeted warmly, get a hot bath if I was cold and wet, plus a meal and fresh coffee. The last time I stopped to see him, it was ‘Upta Camp’ as we say in Maine. He was painting the porch when he turned to me and said, “I’ve had a great life.” It was as though he’d had a premonition because he died in his sleep that night.

When Leland died, it was the last time I remember crying and that was some forty years ago. I kept him alive by making him a character in The Wizard of Simonton Pond, while Aunt Ruby lives on with my daughter Lisa having Ruby as her middle name.