Must You Call the Fire Department When Your Saddle’s Blazing? Or We don't need no stinkin' (something)!

Whenever I hear the word rules, I remember my friend Jack qualifying as chair at an AA meeting many years ago. He said, “when I was a kid, I liked being alone because it was the only time I understood all the rules.” Boy did that ring a bell, so I asked him if I could use it and it became the opening line in Tower Mountain which was included in a Level Best crime anthology.

I do not pretend to know all, or even most of the rules about writing. I’ve taken a few workshops and discussed the writing process with my late Mom, A. Carman Clark, and my sister Kate Flora (both better and more prolific writers than I am). I also read and review between 200-300 books a year, mostly YA. Doing so helps me understand what works, what doesn’t, and when an author got sloppy. I’ve also written for magazines, newspapers and peer-reviewed journals.

Where does that leave me in terms of rules about writing? Good question. Here are some ‘rules’ I try to abide by.

1-Accept that you have no clue where your story, or book is going. I’m currently writing an urban fantasy about a nine year old girl who strongly suspects she’s not completely human. When I got the initial idea, the main character was going to be a sixteen year old boy living by the Narraguagus River in Maine. Instead, I have Thiery waking up in a tent beside her dead mother in the forest surrounding Gettysburg National Monument. Eventually she’ll end up by that river in Millbridge, but I don’t yet know how or when. The rule behind the rule for me here is: Write to entertain yourself and hopefully readers will follow. 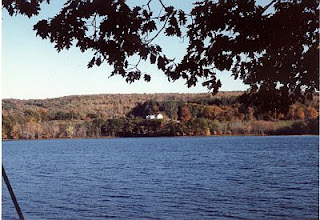 Sennebec Hill Farm from the wast side of the lake


2-Create strong female characters. My mom took on the Maine Public Utilities Commission way back in the 1960s. She was getting serious about her writing career and the MPUC had a rule that married women had to have a phone listed in their name. It had to be in the husband’s name. “Like hell,” Mom said and she took them to task, forcing them to retract the ruling. It allowed women in many professions to be identified by THEIR name and made it easy to be contacted. That was just one of Mom’s many forays into getting equal treatment for women. I create strong teen females to honor her.

3-Write where you live. I’ve lived in Maine since 1949, save for four years when I attended Arizona State University. I know the two Maines quite well. Yes there are two realities within the state. The southern third is very liberal, expensive to live in, and getting crowded. The other two thirds are pretty conservative, hardscrabble, and much less crowded. I grew up in that environment. My father was a poultry farmer at a time when everyone was losing their shirt and there were nights when I fell asleep wondering whether we’d lose the farm. That farm overlooked Sennebec Lake and had 187 acres. We had shoreline, hayfields, a blueberry field, an orchard and lots of woods. When we were roaming the property and my mother wanted to have us get back to the house, she rang a big cowbell from the back porch. At one time, I knew every inch of the property like the back of my hand. 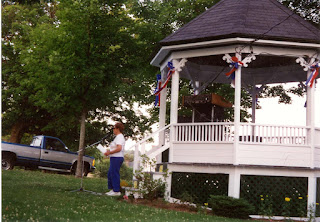 Mom at re-dedication of bandstand on Union Common


We went to a small school and there were plenty of what I’ve come to call ‘open secrets,’ things plenty of people in town knew, but nobody ever talked about. Most of my writing reflects those experiences and as I’ve gotten older and been able to look back at people and situations, my inner honesty about both have changed. I’m more empathetic and compassionate about kids I knew back then who lived in real poverty. I include aspects of them and their reality in my writing as a retroactive tribute.

These are not what you expected in terms of rules about writing, but this is what works for me.