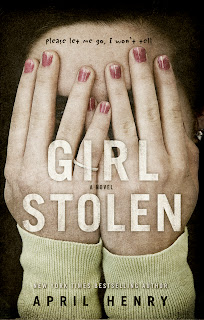 1. You don’t have to write what you know - write what interests you.  Do I know anything about kidnappings, murders, drug dealers, being blind, assuming a dead girl’s identity - no.  But I’ve written books that have gotten starred reviews, awards, and have hit the NYT bestseller list.

2. You can always edit crap.  You can’t edit nothing.


3. You can write  a book in as little as 20 minutes a day.  I know because there have been times when I've done it.  Get in the habit of writing.  Once you have a book contract, you are going to have to meet deadlines. Set goals for yourself, like writing 800 words or writing for a certain length of time.  If you don’t know what to write about, start by getting a book that has writing prompts, like Writing Down the Bones by Natalie Goldberg or What If by Anne Bernays.
4. Start with action - explain it later.  Give the reader a reason to keep reading on page one. But think twice about pulling out the most exciting section in the book, putting it up front, and then writing “three weeks earlier.”  Don’t start with a lot of backstory.
5. Give the character an objective he must achieve to be happy – or to live.  A person without a goal seems rudderless.  Give the main character a personal stake in solving the mystery - more than just a puzzle.
6. Keep the tension high:
- Create a ticking clock.  A real bomb or the bad guy giving a deadline.
- End each chapter with an unresolved issue - a cliffhanger.
- Look for passages that describe the weather, the landscape, the aftermath, or traveling from one place to another.  Then cut them.
- Kill the prime suspect.
- Raise the stakes.  Not only will a child die – but so will a whole kindergarten.
- Cut back and forth between a dangerous scene and one that isn’t dangerous.
- Force the character to make a choice between two things he wants—or lesser of two evils.  What if he can only save one person?  What if she has to choose between lying and letting a killer go free?
7. Make it hard for your main character.  That means it’s harder on you, too.  Tough.
- Have her hiding in a closet with no weapons and a guy with a machete looking for her.  Plus she’s claustrophobic.
- Have him stranded in the woods with a sprained ankle and a snowstorm coming in and two guys with machine guns hunting for him.
- If you hurt a main character or even kill one, especially a likable one, the reader knows no one is off limits.
8. Plant it early. The main character must work out a solution based on things that have already happened or been revealed.  If the character has failed at the beginning of the book - failed to save his partner for example - have him face a similar problem at the end, a successful echo.
9. You don’t have to outline - but you can.  The one caveat is that if you write a mystery and you don’t know who the killer is, you are going to find yourself doing a lot of rewriting and it might take too long to write your next book.  Series books often come out a year apart.  It’s not as necessary to outline with thrillers.  If you don’t plot in advance, just keep raising the stakes for your characters.
10. In this business, tenacity is as important as talent.  Many fine writers have given up after getting a few rejections from agents.  Don't let yourself be one of them.

Email ThisBlogThis!Share to TwitterShare to FacebookShare to Pinterest
Labels: -