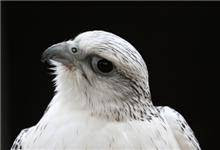 Next Monday I'm talking about Wildwing at a raptor show. This is cool partly because of the awesomeness that is falcons, eagles, owls, and their brethren. And it's cool partly because it's free to anyone under 16 (family alert! Cheap thrills at the Columbia Gorge Discovery Center!) But it's triply cool because I discovered the heart of Wildwing at a raptor show, so this is like coming full circle.

I'm not sure "full circle" is the right term. That means coming back to where you started, like that illustration of Winnie-the-Pooh walking around and around the same copse of trees (I still remember discovering the word "copse" in that book.) I'm thinking more of when you come back to the same place and realize you've grown.

You know how at the end of a great book you often hear echoes of the very first pages? You're where you started, and yet everything is different, because the people in the book have changed. Those first and last pages cradle the rest of the book. Along with the realization of what's different now, there's also a profoundly satisfying feeling of completeness.

That first raptor show was outside a castle in Germany. I'd been visiting castles and cathedrals, grabbing up medieval atmosphere for my time-travel book. Now I was sitting on bleachers looking down at a man with this gigantic bird on his fist, when another trainer standing behind me called out. All of a sudden the falcon was flying right at me. That's a lot of beak and talon and wingspan! This incredible creature ended up soaring about a foot above my head, and I looked right up--every single feather was distinct. I felt the wind of its wings on my face. I knew right then that Addy, my time traveler, was going to spend time with peregrine falcons. And the handsome falconer's son. And find out a few things about her own flight, freedom, and strength in the process. 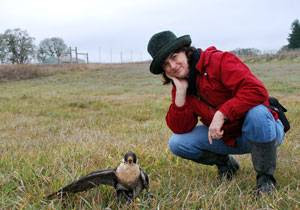 Here I am doing some research with a friend.
Now, March 21, I'm talking about Wildwing and my discoveries at the raptor shows at 11 and 2, sharing how far that connection with falcons took me and Addy. Who knows where it will take the people that come to the shows that day.

Of course! The term I want is "ringing flight." That's what it's called in falconry when a bird circles upward in a spiral, higher and higher, gaining the height it needs. This is my ringing flight. I'll be in a similar place, but with a different perspective, a little more height under my wings.