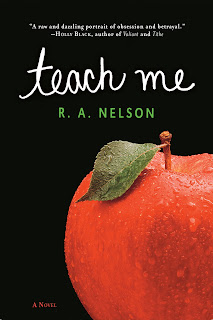 I have always been fascinated by trying something new. I think this fits in well with writing "outside the lines.” When I wrote my novel Teach Me, I had a great time playing around with the voice of the main character, Nine. I wanted her to be passionate about many wildly different things—primarily scientific things in the beginning—but she also turned out to be quirky, funny, and a little bit obsessed. Maybe more than a little bit. Really I don't think I had any idea about all this or where her character was going when I started. I only knew I wanted her to be super smart, then I could just sit back and listen to the things that came out of her mouth:

Welcome to my head.
Let’s hit the ground running. I will get you up to speed. We need a short learning curve here. Those are things my dad likes to say. He works for NASA. He spends his days figuring out problems like this:
If an object weighing 8.75 ounces traveling 10,000 miles per hour strikes the earth, how big a hole does it create?
Answer: One exactly the size of my heart.
Call me Nine.

Those are the opening lines from Teach Me. Looking back on earlier things I have written, I can see that I have been experimenting with voice in novels for a good while.

For example, back in 1998 I was re-reading George Orwell’s novel, 1984, and this time when I finished the book, my mind wouldn’t leave it alone.

By the end of the novel, you knew Orwell's main character, Winston, was done. Beat down, hollowed out, utterly defeated. Ground under the iron heel of Big Brother and Ingsoc. But then as a reader you had hints all along that Winston was good for only one go-round. He was already tired when the whole story began, after all. Even at 39, he was prematurely aging and not in the best of health, always scratching at a varicose vein above his left ankle. But that was part of the power of the book – that someone like Winston could still find the courage and energy to rebel. Could even fall in love. But even as he timidly warred against the system, Winston knew the end game all along: We are the dead, he said as he embraced his lover for the final time.

But what of Julia?

Julia was spunkier than Winston. More vital and upbeat. Willing to take bigger risks. In spite of everything, she wasn’t a downtrodden character, but almost gleefully resisted authority – a glee tinged with a biting undertone of ferocity as she laughed at Big Brother’s face in private.

Unlike Winston, Julia had spent her entire life growing up inside Oceania’s oppressive environment. She had never known anything else. Yet somehow she had managed to become something even more radical than the man she loved. She worked on the “novel writing machines” producing pornographic materials. She was young, blunt, something of a smart ass. Surely the story wasn’t over for her? And wouldn’t her inner voice, her truest voice, be wildly different from Winston’s?

This sparked an idea. Why not continue Julia’s story in her own voice? First person? Broken and clumsy and rushed? A voice salted with newspeak and Party lingo and peppered with anger over what had been done to her? Filled with excitement, I rushed to the keyboard and started clattering away. I was going to call the novel Julia.

Today after unlight I went to Victory Square and watched them hang Winston. The Brothers and Sisters doublecrossed their arms above their heads and yah yahed like something electrical. I yah yahed with them plusloud. His body dropped like a sack. He did not move like the others. The others jerked like rats suspended by their tails. Right in the middle of the jerking an attack came. It was Eastasia dropping steamers again. Everything shocked all over, throwing up hard pieces of blowout with a lot of sound. Then our guns started pumping colors into the sky. I am hungry. I am always hungry. Winston was the fourth one from the left. They pulled a leather hood over his face but I saw him. Something about the hanging changed his neck. All of their necks were changed. The skin was stretched doubleplus long and tight and it showed like wax on a candle. Winston did not see the Golden Country. No one does.

I was having a blast until I realized that no way would Orwell’s estate ever allow such a thing to be published. Heck, they even sued Apple over the original Macintosh "1984" ad. Utterly deflated, I filed away the snippet, about 1,500 words or so, and there they have sat in cyber dust for going on 13 years now.

The end product would have probably been a good bit different than what you see here. But that’s part of finding your way to an exciting voice: there’s a lot of throat clearing, false lunges, lurching stabs at capturing what you can “hear” with your inner ear but somehow can never quite get down on paper.

Who knows if I could have pulled it off? My older self reads my younger self’s unedited words and sees lots of ways to change it, strengthen it, tone down the “look at me” parts, etc, without losing the overall tenor. But that’s a challenge I would have relished. Maybe someday I’ll gather up the temerity to approach Orwell’s estate, metaphorical hat in hand, and say, hey, what about Julia?
Posted by R.A. Nelson at 11:30 AM