Janet trying not to be Wimpy and Failing

I've got to be honest here. I am having a really hard time with blogging this week.

I hate to be a whiner. I don't want to be that person whose words drip with sad and weepiness. I don't want to tell people about my pain because I want them to feel sorry for me. But the thing is...it's hard to focus on much else. I kind of am the pain right now. And as a writer I like to put things down on paper. Or a computer screen. So this is not to elicit sympathy but to help me heal. 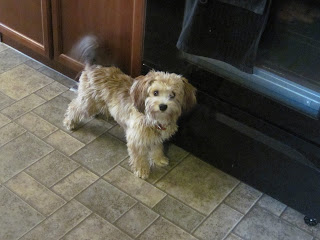 I don't want to belittle or demean anyone else's loss. But here's the thing. I had this cute amazing little dog. She loved absolutely every single human being on the planet.  She quivered and vibrated with energy. She was the epitome of a new soul. A good soul. Happiness personified.

We didn't train her very well. She was so little, only about 5 pounds, so we thought, what harm could she do? And that's where we went wrong. In one of those horrible accidents where it's all what if and if only and a matter of a few seconds of really bad timing Meeko ran out on the street right in front of our house and was instantly killed by a car.

I saw it happen, and worse, so did my son. It wasn't pretty. There was a lot of blood and there was a lot of screeching and crying. On my part. On the part of the poor woman who hit her, and my poor little boy. I'm so worried for him, for the trauma of seeing his little two year old dog like that. She wasn't supposed to die yet. Not for many, many years. He is handling it as best he can, but no parent wants their child to have to see something like that.

He's just old enough that he's aware that death is something that happens. And scared because he saw first hand how it can happen so quickly and so tragically. It's a hard life lesson and parents, well we like to protect our kids don't we?

I think it's hard to admit how much grief I feel over the sudden loss of Meeko, because I'm afraid that I'll look like a wimp or weak to people who don't have pets. I'm afraid of people who think, well, it was just a dog.  At least it wasn't a person. And no. It wasn't a person. And for that I am incredibly grateful. But I didn't want to lose her. I miss her so much. It seems wrong that a creature so good went in such a bad way.

One of my first thoughts after she was gone was that I would have to change my author profile because I mention her in it. And yes, I am aware of how weird that is. But all I could think of was that I talked about her in my book, and now she's gone and I don't want people to ask about this cute, untrained little doggy I mentioned as if she's still alive.

This:
Janet Gurtler lives in Calgary, Canada, deliciously close to the Canadian Rockies with her husband, son and an untrained dog named Meeko. Janet does not live in an Igloo or play hockey, but she does love maple syrup and says “eh” a lot.

Has now become this.
Janet Gurtler lives in Calgary, Canada, deliciously close to the Canadian Rockies, with her husband, son, and the memories of a sweet little dog named Meeko. Janet does not live in an igloo or play hockey, but she does love maple syrup and says “eh” a lot.

Life goes on. Time will make things easier. I have to try to remember the joy she brought and not the horrible way she went. And I will.

We lost another beloved dog, Peppsy, a black Lab, only about 2 and a half years before Meeko. She was older and sick and the loss, while sad, did not feel as tragic.

However. I do have a fun little secret. I have a little tribute to both of them in my book, I'M NOT HER out in May.  There are two teachers who appear in the book. One is named Mr. Pepson, the other Mr. Meekers.  For Peppsy and for Meeko.

Thanks for the memories, Meeko. The unconditional love. You were deeply loved.  I miss you.