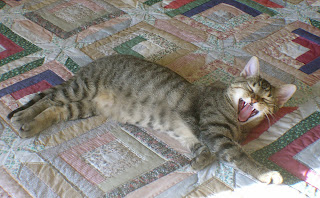 Before I list my goals for the new year, these are the events from 2011 I do not want to repeat--ever:

# 1: Breast cancer. Been there, done that, had zero fun in the process. Apologies to the other survivors, but I won’t be wearing a pink ribbon or survivor tee shirt. My tumor was smaller than tiny and a rare form of cancer that spreads super-slow. A biopsy followed by a lumpectomy and reconstruction, and I was done. Those women who suffered through mastectomies, radiation, and chemotherapy earned their badges of honor. I salute them.

# 2: Crashing my new bicycle into the side of a moving automobile. Also zero fun. And major embarrassment. And excruciating pain from landing on my rear in the middle of the road. Make that zero minus ten on the fun scale. Nothing broken, everything bruised. I hobbled for weeks afterward.

With the never-to-be-repeated bad stuff out of the way, here are my 2012 goals:

2. I will not over train. Too much running caused my Achilles tendon injury, which was the reason I was biking instead of running. I will rest one day a week from running. (Or one day every other week--for sure.) If it hurts, I will rest until it feels better. Yes, I will.

3. I will take back my life from my dogs and cats. Sure, they're proud of how well they’ve trained me, but I’d double my writing productivity if I didn’t get up every few seconds to let them in or out or feed them a snack or toss the ball for Sammy Stripers the kitten to fetch. Or Gizmo the dog to fetch. Or to pet Sassy who’s bored because I’m been writing for 10 minutes in a row. Limits must be set.

4. I will reduce the number of high calorie snacks I eat while writing. Half a wheel of Brie is not the solution to a tricky plot point. Four squares of dark chocolate will not help me develop rounder characters. A rounder rear, yes. Characters, no. Wandering into the kitchen for food is a stalling tactic, not a writing tool.

5. I will finish my presentation for the Iowa SCBWI conference at the end of April BEFORE April so I have lots of time to practice and tweak it.

6. (Fantasy Goal) I will finish the third draft of my contemporary YA fantasy by the end of January and send it to my agent. She will adore it. Several editors will covet it. A bidding war will ensue. The high bid will be millions of dollars. I will accept it. Modestly.

7. (Realistic Goal 6) I will finish the third draft of my contemporary YA fantasy by the end of January and send it to my agent. I will cross my fingers and wait. The waiting may cause some backsliding on Goal 4. That's to be expected.

May you reach all your goals in 2012, especially the fantasy ones.