If You're Lucky, There's Moore Than What You Ever Imagined in the Golf Bag Holder

Like all my fellow writers on YAOTL--I've been giving a lot of thought to luck this month. I'd like to begin this post with full disclosure--I am a card-carrying optimist. This doesn't stop me from being grumpy, moody, and a real meanie some days, but after careful consideration, I've decided I believe that I have some control over my destiny. Or at least how I interpret it.

Luck is a state of mind. Let me explain.

There are times when it's pretty darn obvious that "luck has had something to do with it," whatever it might be. Lets imagine a typical story of luck saving the day. It might hypothetically go something like this...


The traffic on the highway is crazy and because of that, I get to the airport late. I'm having the worst luck ever--I've missed my flight. Life stinks--until I find out later--that my plane just crash landed. I wasn't on it. In the blink of an eye, I've just jumped from having bad luck to having good luck.

But luck isn't usually that easy to figure out. More often than not, the scenario goes something like this.

I miss my deadline for a conference critique and lose my slot. I'm very angry with myself for wasting a wonderful opportunity. I imagine that I've just lost my big break-out moment with the "perfect" agent/editor. This is bad luck. But despite being a grumpy, moody, meanie (I did say that I'm an optimist at heart) I make a friend and we decide to critique each others work--trying to take lemons and make lemonade. We head for the lobby, where unfortunately, we run into more bad luck--all the comfy couches are taken. We spend three hours on a lousy, uncomfortable bench, but we discover a couple things in the process. First, we really like each other. Second, the bench we're sitting on is really a golf bag holder. You can't help but laugh at that. Meaning...I'm not a grumpy, moody, meanie any more, but it's actually not until a little later that it all becomes obvious.  We become best friends and critique partners and we're there to help each other weather the ups and downs of both a writing life and a regular life.


I am so grateful that I missed that critique. Luck is where you chose to find it, so never disregard what might be sitting in the golf bag holder. Chances are--it's Moore than you could have ever imagined. 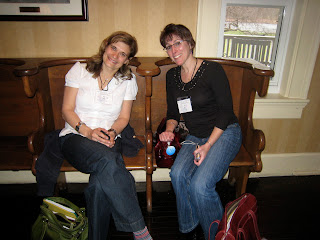 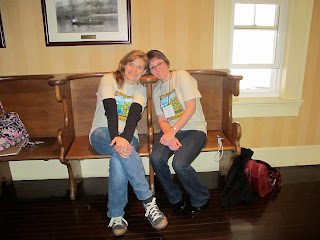 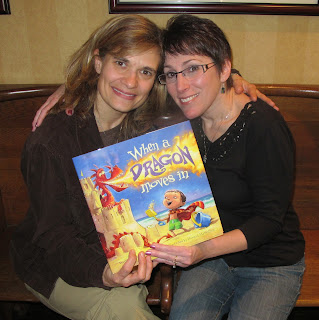