With a Little Luck by Janet Gurtler

It's not something I like about myself, but it's definitely in my head. I try to fight it, to believe that the only luck we have is the luck we make for ourselves. But nah, I don't buy it. Even when I wrote that sentence in the back of my mind a little voice was saying "But there's luck too. We can do as much as we can, work as hard as possible, but luck still factors in."

My name is Janet and I believe in luck. 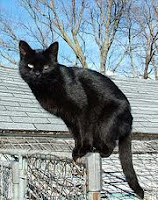 The other day when I was driving my son to school a black cat ran right across the road in front of us. Across our path. I didn't scream or even say anything about it. (I'm trying not to pass along SOME of my weirdness to my son.) But it bothered me. I went home to work on the laptop, pretending the cat crossing didn't matter, but I waited for something bad to happen. And there's always bad things that are easier to attribute to bad luck. Right? I consciously won at not letting it ruin my day, but the first bad thing that happened, I thought of that cat.

But because I believe in bad luck...that also means I believe in good luck. So I'm hopeful, and I think that's something that has served me well as an author. I spent a lot of time searching in clover patches when I was a kid. I never found a four leaf clover. Not once. But I still haven't given up. Show me a clover patch and I'll still scan it, believing I have a chance of finding that elusive one. I guess along with luck, persistence is a really great quality to cultivate.

I'm a believer that luck has definitely played into my publishing journey. Right book. Right place. Right time. Right query letter to the right agent. My first book sold in a way that luck definitely factored into. I had amicably ended an agent agreement with an agent who had signed me for a book about witches (that never sold btw). I had another book written, a boy book about a hockey player that I'd shown the agent, but she hadn't shopped. So our agent/client relationship was over but she went for lunch with an editor of a new YA imprint and told the agent she was looking for a boy book. The agent thought of my book, contacted me to see if I wanted to show it to the editor and, well, you can guess the rest of it. She offered to rep me again for it, and of course I said yes and that was my first sale- Waiting To Score, which I wrote under a pseudonym.

Things didn't work out with that publisher or that agent, perhaps there was some bad luck to offset the good, but I was fortunate enough to go on to sign with a wonderful new agent and a wonderful new publisher, Sourcebooks.  I got to sell a first book as a new author, Janet Gurtler with a new imprint and a fresh start. I like to think there was some great synergy in the new path and lady luck was definitely playing some fabulous games in the background of my new journey. I'm not saying I didn't have to work hard on craft and play an active role in working towards the book sales, BUT I do like to think that luck has lent me a helping hand from time to time.

I do believe we choose our own paths in life, but sometimes it seems like the roads on those paths can be made rougher or smoother by outside forces.  Let's hope the force is good. The luck is good.

In the meantime, I don't carry a rabbit's foot, but I have other things that I believe make me luckier. ;)  Superstitious.  That's me.  No twelve step program needed.
Posted by Janet Gurtler at 5:16 AM