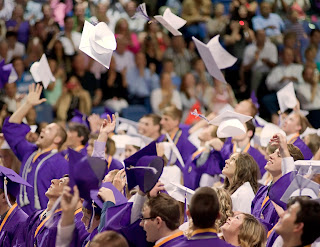 Beginnings and ends, they come in rolling waves toward the end of high school. The timing of this blog is particularly poignant because my oldest is a 2013 high-school graduate.
His recent events have naturally brought forth memories of my own coming-of-age experience.
I graduated from Warren Woods High School in 1979. Think painter’s pants, Annie Hall-style baggy skirts, cowl necks, and platform shoes. The preppy look was becoming popular, but not in Warren, a working-class suburb of Detroit.
Compared with today’s standards, there was a lot less parental oversight back then. And I was an all-A, college-bound student. I honestly don’t remember my newly widowed mother discussing universities or majors with me, but that probably had more to do with the fact that she was at her own crossroads.
Also, college options were limited to the state of Michigan, where, for the most part, it’s a two-horse race: Michigan State or the University of Michigan. I went with the Spartans (Go State!) based mostly on the fact that my older sister was already enrolled there, which would make things—transportation, for instance—easiest on my family. An out-of-state college experience never occurred to me. For starters, the cost would have been prohibitive. Regardless, my known world and comfort level was limited back then.
My son’s situation is entirely different. Our family moved to Des Moines from Los Angeles when he was in fifth grade. While he’s adjusted to Iowa and has many friends, his loyalties are divided between the West Coast and Midwest. He’s traveled far more than I had at his age, and his college search was based, in part, on where he sees himself settling.
For my part, I had no idea where I would end up. And, quite frankly, I didn’t want to know.
I loved the uncertainty. I remember vividly the thrill of an open future. Heck, I started college with an undeclared major. I had no idea what I wanted to be.
Though I’d lived in Michigan most of my life (I was born in Canada but left as an infant), I had a healthy measure of wanderlust. (Owed in part to the fact that my parents were both born and raised in England.) I’d studied French for four years in high school and continued in college, spending a semester in Paris. I even returned post-college to live and study in Nice for a year. When back on American soil, I discovered three of my four college roommates had moved to Los Angeles. So I packed up my Toyota Tercel and moved out there with the intention of staying through grad school. Twenty years later, I was still there: married, the mother of two, and with a career in the travel industry.
And empty nest is only two years away for me and my husband. While it admittedly saddens me to ponder this, it does, yet again, offer the prospect of change. We have no Iowa ties. Should both my sons choose to settle out of state, I think we would, too (eventually). My sisters and mother are now in the Chicago area. My husband was born and raised in Northern California.
Which brings me back to my son and his choice…the University of Oregon. Hmmm. Ocean. A milder winter. Pinot Noir country. Who knows? And that is all the fun of it.
Email Post