THE GREAT DIVIDE by Joy Preble 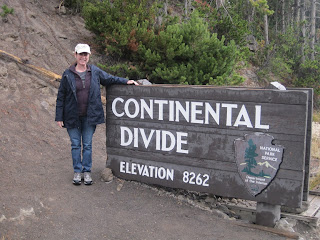 If you are not aware, the waters on one side of the Continental Divide of the Americas flow to the Pacific; the waters on the other side, flow toward the Atlantic. This particular spot where I'm standing  is in Yellowstone National Park. It was the first week in October in 2011 and the Yellowstone trip was the first fall vacation I'd ever taken. Teachers don't typically take October vacations-- although I hear there are some districts in places not Texas that get time off then. But I was taking this vacation because I was no longer teaching full time-- had in fact resigned to write full time and teach part time and maybe earn money in other ways that I was still figuring out. I was living without the safety net of that guaranteed income and it was both scary and freeing. A Continental Divide of another sort-- a before and an after. Just a year before, in 2010, I'd been diagnosed with thyroid cancer--another divide. I'd had surgery and radioactive iodine treatment and I was now cancer free but it had definitely occurred to me along the way of trying not to die that it's a short stay on this planet and if I was going to try to write full time I'd better get to it. And so in January of 2011, I made a reservation at Old Faithful Inn for the following October, an act of faith that I would actually go. I figured if we were going to go to Yellowstone then I wanted to be able to sit on the balcony each evening with a cocktail and watch that famous geyser erupt.  It's really quite spectacular if you've never done it, although it is definitely not the most spectacular thing in that park.  That first night we were there, that's exactly what we did. I sat in the cold, crisp air and sipped my bourbon and watched nature's show and knew that for better or worse, I was on the other side of things. I would write until it was time to do something else and I would make a life in a different way than I had before. Everything would flow in a different direction.

The next day, my husband snapped this photo. There was something about standing there, knowing that all those geological forces were doing their thing and rivers were flowing in opposite directions that gave me this enormous awe, made me feel small and impotent and in the hands of something...bigger.

Not long after that, a buffalo almost rammed our rental car. But he didn't, so it was okay.