The Top of the Bookshelf (Courtney McKinney-Whitaker) 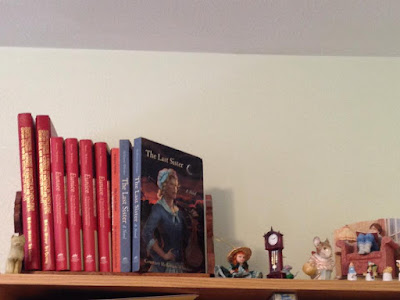 This is the image I chose as the cover photo when I updated my website, Twitter, and Facebook author pages. It took me a long time to figure out what I should use because I have struggled mightily to figure out how to express what I do and who I am as a writer in a succinct, brandable way.

My interest in more than one (many, many more than one) area of everything has been the bane of my scholarly and professional existence in a world that demands and rewards specialization.

I began my (published) writing career with a scholarly monograph. (A weird place to start, I know.) I published a YA novel and several literary essays. More recently, I've turned to poetry and work for very young children. The manuscript I'm shopping around right now is a picture book biography for (probably) primary readers. And now I'm working on an adult novel and a YA dual biography, among all the poetry and essays that keep pushing their way in.

Struggling to find an image that would define me, I ended up taking a picture of the top of the bookshelf in my office. Here's what's on it, from left to right.

*Copies of my M.A. thesis: Reconstructions: A Feminist Perspective on Twenty-First Century Responses to Nineteenth and Twentieth Century Civil War and Reconstruction Narratives

*Copies of my B.A. thesis (scholarly monograph cited above): Eunice: A Tale of Reconstruction Times in South Carolina, An Edition of the Novel by William James Rivers

*Copies of my Y.A. historical, The Last Sister

*The books are sitting on a set of adjustable bookends shaped like squirrels that my parents had on the desk in the kitchen when I was growing up. I'm kind of surprised my mom let me have it, because she loves squirrels, but I guess she loves me more.

*An Anne of Green Gables ornament my in-laws brought me from their trip to Prince Edward Island (I really want to go there.)

*An ornament I found in my grandparents' Christmas stuff after they passed away. That's the mouse running up the clock, of Hickory Dickory Dock fame.

*A figurine of Beatrix Potter's Mrs. Tittlemouse that I'm pretty sure was a baby gift for me when I was a baby.

*In front of the bookend are four little figures on thimbles. They are all that remain of my middle school obsession with Hallmark Christmas ornaments: Alice, the Cheshire Cat, the Mad Hatter, and the White Rabbit.

*One of those Boyd's Bears (I think) that were so hot in the nineties. It's the Scottish bear from the "Around the World" Collection and was another Christmas gift from my parents.

This picture actually does a decent job of encompassing my work. There's the scholarly stuff, some early childhood stuff, some middle grade stuff, some YA stuff, some adult stuff. It hits on books and themes that have been important to me, and because I didn't stage it, it's an authentic glimpse into who I am as a writer and as a person.
Posted by Courtney McKinney-Whitaker at 6:00 AM