Character Voice in Fiction (and Voice Save America, for Real) by Dean Gloster 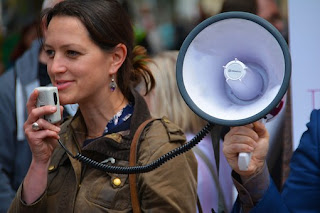 Voice is the mysterious ingredient that hooks readers (and sells our stories to publishers) in part because it’s a compressed way to convey personality, humanity, and world view. As Stephen King said of good openings, voice says, “Listen. Come in here. You want to know about this.”
My debut YA novel, Dessert First, opens in the voice of its first-person protagonist, hurting, funny sophomore Kat Monroe:
“I’ve thought a lot about what happens when we die, and I’m pretty sure it’s not reincarnation. No loving and merciful God would put us through high school twice.”
In those twenty-nine opening words, Kat reveals herself. She thinks about serious subjects, grappling with them through humor. And she has a difficult relationship with her classmates.
That’s the first thing voice does: It reveals a character’s world view, sensibility, emotion, attitude, and what she most cares about. It conveys personality and uniqueness. 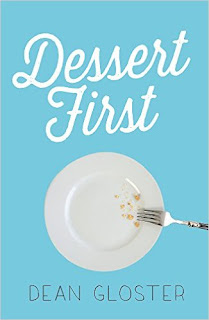 Voice, in fiction, is difficult to describe and even harder to teach, in part because it’s a product of so many other things—narrative distance, point of view, word choice, style, emotion, and—especially—attitude. Voice is, at its essence, the splash of personality on the page, to create the complex colors of conflicting emotions. How do you describe or teach that? 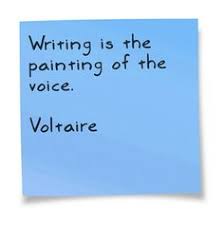 Fortunately, at least for establishing the voice of our protagonists, there are two approaches that make it easier. First, especially for young people, attitude comes out in voice and helps to create it. That’s one reason young adult fiction is often written in first person and is characterized by distinctive character voice—often, teens have plenty of attitude. Second, voice comes from earned (often painful) experience coupled with the willingness to express that experience authentically, instead of hiding it through conformity.
My favorite YA book for striking voice is Adrienne Kisner’s forthcoming Dear Rachel Maddow, out on June 5 this year, but already a Junior Library Guild selection and winner of the PEN New England Susan P. Bloom Discovery Award. In it, Brynn Harper is reeling from her older brother’s overdose death, from abandonment by her father, from getting dumped by her first girlfriend, from getting shoveled into the remedial track in the high school basement, and from her mother’s remarriage to the abusive stepfather Brynn calls Fart Weasel. 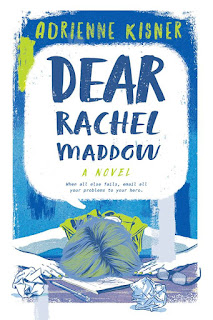 Brynn tells us the story in a series of hilarious, searing, profane, self-deprecatory emails to her hero Rachel Maddow. The unusual format is perfect, not only because it highlights Brynn’s terrific way with words, but also because political injustice at Brynn’s school is what gets Brynn energized to rejoin life. It’s a screamingly funny book that made me cry almost as many times as it made me laugh out loud. (Dozens.)
But strong, arresting voice doesn’t have to dazzle with humor or crackle with creative word choice. One of my favorite examples of great voice is Ally Condie’s wonderful Summerlost, an Edgar award nominee last year. Twelve-year-old Cedar Lee is struggling after the car crash that killed her father and her autistic younger brother. She strikes an unlikely friendship with a boy in her new town, works at the summer Shakespeare festival, and investigates an old mystery of an actress’s death and a new one too—who or what is leaving her dead brother’s fidget objects on her window sill? But the real mysteries are of the human heart. What makes someone become your best friend, and how can you come to terms with your complicated grief after your father’s and brother’s death? 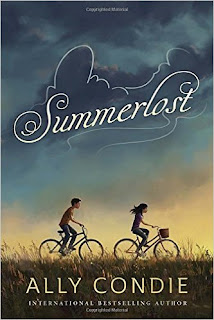 Kirkus Reviews wrote of Allie Condie’s earlier bestselling Matched series, that her “prose is immediate and unadorned with sudden pings of lush lyricism,” but it’s even better than that. Appropriate for her 12-year-old protagonist’s first-person voice, the sentences are simple, but also unselfconscious and achingly honest, as Cedar grapples with loss. “My brother was a boy and now he’s not anything.”
Somehow, Condie manages to capture and create, in words on a page, the feeling I get listening to some piano music, of how sound goes to silence, at the end of a note. That’s voice.
These three books have two things in common, in creating their distinct protagonist voices. First, the characters have strong attitudes. Second, each of the characters has gone through—and are going through—profound hurt and loss. And they’re willing to let that pain shape how they speak to the world and about the world, revealing their authentic selves. They are not silent, even as their voices break, at the edge of tears. 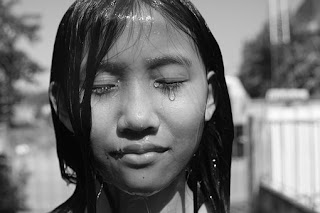 I’ve thought a lot about voice and young people in the last month, an extraordinary time in the U.S.
Teenage survivors of gun violence are speaking out, saying things about common-sense gun reform that their U.S. Senators are afraid to consider, let alone propose. Others, from the Black Lives Matter and Me Too movements, continue to speak out. Despite a concerted attempt to silence them all. 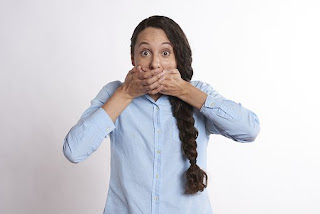 Young adult fiction insists that young people do have an authentic, valid experience worth listening to and a voice of their own to describe it.
That view, though, is now under assault. Two weeks ago Fox News commentator Tucker Carlson announced that teenagers are “children” and therefore “not citizens” entitled to have their views heard on the issue of gun regulation. The Fourteenth Amendment, however, confers citizenship at birth in the U.S. And, as Trevor Noah put it, “If they're old enough to get shot, they're old enough to have an opinion about getting shot.”
In a thinly-veiled threat of violence that our “time is running out,” NRA ads also just targeted those of us using our voices to oppose their parroted talking points—including every “lying member of the media,” “Hollywood phony,” and “athletes who use their free speech to alter and undermine what our flag represents.” Threatening music, fade to black.
Note to the NRA: The U.S. flag actually represents freedom of speech and equal protection of the laws, not violent intimidation, political bribery, limitless profits for companies selling military-grade weapons to civilians, and institutionalized white supremacy.
At least at our best. And, as a country, we should strive to be our best.
But if we are going to be our best—or at least not our worst—people have to speak their authentic experience out loud. They have to use their voice. To speak out, to vote, to register other people to vote, and to have the backs of those who speak out in the face of efforts to silence them—including young people, people of color, and women.
We’re at a critical juncture, in the U.S., about whether we will be led by representatives who listen to us, or instead by rulers who tell us what to think and who to scapegoat.
So, while it’s still possible, use your voice.
To do that, bring your attitude and speak from your place of loss. And say it out loud.
Even—or especially—if your voice shakes with emotion. 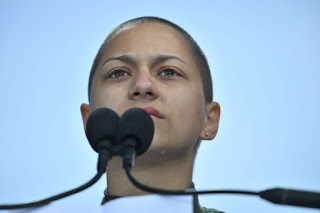 Dean Gloster has an MFA in writing for children and young adults from Vermont College of Fine Arts. He is a former stand-up comedian and a former law clerk at the U.S. Supreme Court. His debut YA novel DESSERT FIRST is out now from Simon Pulse. School Library Journal called it “a sweet, sorrowful, and simply divine debut novel that teens will be sinking their teeth into. This wonderful story…will be a hit with fans of John Green's The Fault in Our Stars and Jesse Andrews's Me and Earl and the Dying Girl.” Dean is on Twitter: @deangloster. He recently gave up hopelessness for Lent and for the foreseeable future. 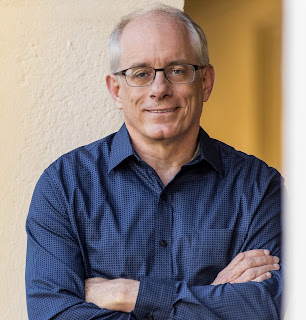