Whose Voice Is It Anyway? (By Marlo Berliner)

So, this month's theme is about YA voice and how we come up with it. Well, pull up a chair, make yourself comfortable, and I'm gonna tell you the secret.
Comfy now? Ready to hear these great words of wisdom?
Well, here it is.
We use magic.
Okay you caught me, it's not really magic but if you do it right, it's the closest we'll ever get to magic. In my mind, the perfect YA voice captures what it feels like to be young - to be experiencing everything important in life for the first time, not knowing what the hell is going to happen next, and not knowing if you're getting anything right or everything wrong.
So, how does one distill the magic of youth down into the perfect elixir for a reader?
Personally, I get in my wayback machine and put myself back in my shoes as a teen. No, really. I do.
I ask myself things like - What would I have said in this situation? How would I have felt? What's the first thing I would've done? What's the last thing I would've done? Not me now, but me then. 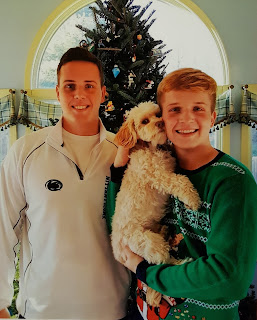 I think it helps that I have two boys of my own - one who is 17 and one who is 20, only recently having left his teen years behind. I listen to the things my two boys say - not the buzzwords, the slang, or the jargon they use, because that will become dated very quickly - but instead, I listen to the undercurrent of what they're feeling, the subtext in their words. And that, is what I try to recreate on the page. I guess I do a decent job at it since my book, THE GHOST CHRONICLES, was just an Amazon #1 bestseller this week in the US, UK, Canada, and Australia.
The key is to never try to sound like a teenager. The minute you try too hard to sound like teenager, you've probably blown it completely. It will come off as inauthentic and clunky, at best. And that goes for trying too hard in both the narrative and the dialogue. One of the biggest mistakes I see in the YA manuscripts I read, in terms of voice, is this adult self-awareness that spews out of characters’ actions, mouths, thoughts and explained motivations. No, no, no. Very few teens are that self-aware of their inner-motivations, implications of their actions, or self-realization. They’re at a place in life where they’re just learning that part, and getting comfortable with that part. And that’s the magic.
One of the things I do very often to make sure I have an authentic voice in my manuscript is to read it out loud – all of it. Not just the dialogue. When I was growing up my hobbies were dance and theater, so I draw upon that experience. 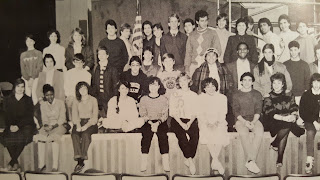 (I won't point out which one is me, or say what year it's from, but I'm in this yearbook picture of the Hun School Janus Players.)
So what I do is actually read the manuscript in each of the character’s voices. Many times I act it out, too. In other words, I get in character the same way an actor would. If anyone saw me while I was writing or heard the voice recordings on my phone, they would probably have me committed. I tend to dictate scenes into my phone that are well…complete scenes. With all the emotion, pauses, tears, whispers, screams, emphasis and inflections that there would be if you were seeing it on the silver screen. It may be a little weird, but that’s the best way I know for getting the actions, thoughts, and dialogue just right. If anything sounds contrived, or unnatural, or too much like adult-me, it gets cut when I transfer it to the page.
So there you have it...my take on the YA voice.
I'll leave you with one last picture. This is my yearbook picture from the Hun School newspaper, The Mall. I'm the brooding writer in white all the way on the right. 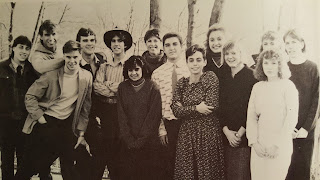 Marlo Berliner is the award-winning author of THE GHOST CHRONICLES, her debut book which was released in November 2015 to critical acclaim. The book won the 2016 NJRW Golden Leaf Award for Best First Book, was named FINALIST in the National Indie Excellence Awards for Young Adult Fiction, received the Literary Classics Seal of Approval, was awarded a B.R.A.G. Medallion, and was named one of the “best indie YA books we have seen in the past year, from both self-publishers and small presses” by IPPY Magazine. Marlo is represented by Eric Ruben of the Ruben Agency and she writes young adult, women’s fiction, and short stories. She is also an editorial intern for a NY literary agent. Her second book, THE GHOST CHRONICLES 2, was released in October 2017.
When she's not writing or editing, Marlo loves reading, relaxing at the beach, watching movies, and rooting for the Penn State Nittany Lions. After having spent some wonderful time in Pittsburgh and Houston, she’s now back in her home state of New Jersey where she resides with her husband, two sons, and a rambunctious puppy named Max.