My Roundabout Path to a Teen Voice (Brenda Hiatt)

I probably came at my YA author voice a bit differently than most because I’d been writing Regency-set historical romance for years before attempting my first young adult novel. After 15 books set in the past, I had my historical voice down solid, to the point I sometimes threw occasional Regency-isms into conversation, then had to explain what I meant.


Unfortunately, writing 15 historical romance novels in a row, some on tight publisher deadlines, left me fairly burned out on the genre—and, for a while, writing itself. Needing a complete escape, I began reading outside the genre and found myself gravitating to recent middle-grade and teen fiction, beginning with the Harry Potter series and moving on to the Twilight series, the Hunger Games series and more.

There was something about all of these books that appealed strongly to me. The world-building in some was exceptional, of course, but I think what spoke to me most was the emotion. These not-quite-adults felt such raw yearning about, oh, everything! As teens do, because when you’re a teen, even small things feel desperately important. The more I read, the more juiced I was to try my hand at writing teen romance, where I could fling so much more emotion on the page than I could believably do with adult fiction, historical or contemporary. As it happened, I’d had a vague “what if?” idea playing in the back of my mind for a year or two that lent itself perfectly to a YA novel, maybe even a series. So…what the heck? Maybe this was just what I needed to get my writing juices flowing again.

And it was. But it was also much harder than I expected—and the main reason for that was Voice. Needless to say, my Regency historical voice did not work when narrating a book from the perspective of a modern 15-year-old girl.

For example, my Regency heroine’s best friend might say:

“Goodness, but Lord Foxhaven is handsome! I vow, if we ladies are not careful, he could quite turn our heads.” 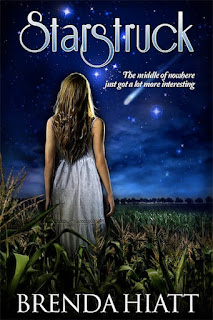 Because this was my very first effort in a new-to-me genre, I knew I had to get it exactly right…but it was hard. What helped most was time-traveling (inside my head) back to high school and my own teen years, when I was a lot like my geeky, insecure heroine who never quite fit in. Once I was able to slip into that mindset, the words really began to flow. Now, this isn’t to say that I had a “magic moment” and the writing suddenly became easy. Even after five books and a novella in that series, it’s still not easy. But it started to feel more and more natural and, more importantly, writing became fun again!
By the time that first book, STARSTRUCK, was finished, I had put more of myself into Marsha/M than any other character I’d ever written. Is it any wonder I love these books—and this character—so much?

As part of getting my teen voice just right, I employed a small army of beta readers for that first book, beginning with my own daughters. Teens can be pretty brutal (especially when they’re your own!) but that was exactly what I wanted and needed. Needless to say, their feedback helped enormously—even if it stung occasionally. And judging by the reviews and emails I’ve been receiving about this series, a lot of readers agree!

As a side note, after writing the first four books in this series (a complete story arc, after which I was ready to shift gears), I decided to attempt another historical romance…and getting back into that voice also took a bit of effort! Now I make a point of reading a few favorite books in whichever genre I’m about to write to get back into the proper groove. So far, so good!