January is usually when people talk about fresh starts and new beginnings, but most of us here weren’t quite ready for that last month, So, we put it off until February. Last month, things still felt rather dark, rather…2020. As for me, I hadn’t yet managed to write a single word on my next book. This month, though, I finally feel like the logjam of the past year may be breaking. (I even took down my Christmas tree, finally, after keeping it up—and lit—for a solid month-plus after Christmas.)

The whole idea of “new beginnings” is resonating particularly strongly for me just now, because I’ve written at least four different openings for the next book in my Starstruck series so far, as I try to figure out the most engaging place to start the story. LOL! I’m sure I’ll settle on one soon…either one of the ones I’ve already written or yet another, better one.

At the same time, a fair chunk of my creative brain space has been devoted to a totally different “fresh start”: an all-new, basically complete Starstruck Musical! This is a complete first for me, and very exciting. I may have mentioned last year that my singer/musician daughter and a composer friend of hers were working on creating a musical out of Starstruck, the first book in that series. Now, as of this month, all the music is written, the script and lyrics have been polished several times, and the show just had its very first read-through/sing-through by a cast of VERY talented musical theater actors. I had the privilege of sitting in on that and it was mind-blowing to see my own book brought to life that way! 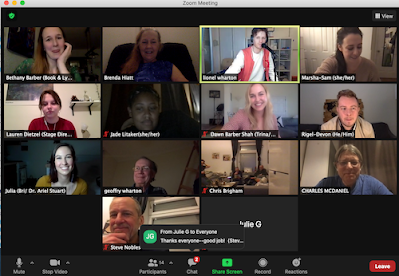 The above screen shot is from that reading, and the pic below links to a lyric video my daughter produced of Palace in the Stars, the second song in the show. (This is Marsha’s “I Want” number, her equivalent of “Somewhere Over the Rainbow.”) I’d love to hear what you think of it! 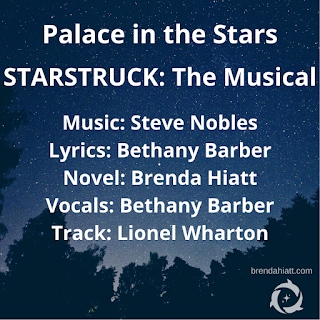 I hope February finds you in a more positive, hopeful place, too. Surely, things will only get better from here on out!

Brenda Hiatt is the New York Times and USA Today bestselling author of twenty-five novels (so far). The most recent, Convergent, released October 27, 2020.