August and Everything After – Jen Doktorski

August and I have a complicated relationship. That happens when your birthday lands in the waning days of summer. You want it to arrive and when it does, you need it to last because everything changes after that. The kids’ laughter trickling down the street no longer comes from the town pool, but the elementary school playground around the corner. The air smells different without the humidity and summer flowers, and the bugs sing with urgency anticipating their demise.

August is a vibe. Just like one of my all-time favorite albums August and Everything After by the Counting Crows. Just like the YA novel I wrote with both that vibe and the record in mind, which was published in 2018, 25 years after the album’s release.

Fun fact. The song August and Everything After does not appear on the album. It wasn’t officially recorded until 2019. But the handwritten lyrics to said song appear in the background on the cover art.

In a Rolling Stone interview, Adam Duritz said “I was born in August. The record was about everything that happened after that. I loved the title more than I liked the song, quite honestly.”

I wasn’t considering my first appearance on the planet, or Adam’s, when I heard this record in 1993. Nor was I thinking about it when I wrote my book. Mostly, I wanted to capture what music has meant to me—the healing, the love, the creativity, the complex layers, the connectedness. There is actual magic in a three-minute song.

I haven’t sold or published a book since August and Everything After. And like the line from the Sundays’ song Here’s Where the Story Ends, which I reference in the book, it may wind up becoming a little souvenir of a terrible year. But you know what? I’m okay with that. Mostly because every year after has been better. But also, because it’s the book of my heart. My mic drop. The main characters Quinn and Malcolm, as well as the supporting cast, continue to age and grow as humans inside my head if not on the page. I’ll forever think about them, the Counting Crows, and the birthdays of people here and gone, every August. 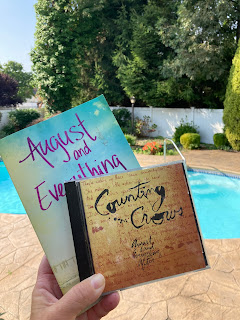 And now for the shameless self-promotion. For the next five days, the e-book is just $1.99 across all platforms. If you'd like to meet my characters, now’s your chance. And if you do, I’d love to know what you think of them.