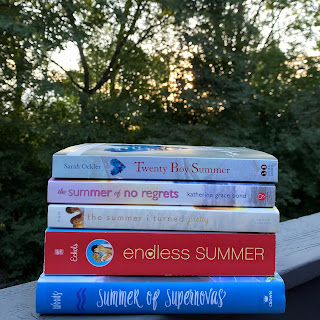 This month on YAOTL, we’re dishing the truth about our summer vacations. The truth is… I finished a draft I’ve been working on here and there for five years, I meditated at the summit of Cadillac Mountain at Acadia National Park, and, like every summer, I've been reading. A lot.
As a kid, even though I loved school, summer offered the freedom to read whatever and as much as I liked. I plowed through the shelves at home—my own and the books left behind by my older siblings, like the Meg mysteries and the Happy Hollisters. I brought home as many books from the library as I could fit into my bookbag. Summers were when I returned to my beloved books like the Anne of Green Gables and Emily of New Moon series (and still do).
Some of my favorite books take place in the summer, and I even wrote one myself. I wanted to share a list of my favorite summer reads over the years, but that task feels impossible, so I narrowed it down. Today I’m going to share my Top 5 Summer YA Reads (With Summer in the Title) in no particular order.

Summer of Supernovas by Darcy Woods

As the daughter of an expert astrologer, Wilamena Carlisle knows that truth lies within the stars. So when she discovers a planetary alignment that won’t repeat for a decade, she’s forced to tackle her greatest astrological fear: The Fifth House—relationships and love. But Wil must decide whether to trust her heart or her chart when she falls for a sensitive guitar player whose zodiac sign points to cosmic disaster.

If Wil’s fate is truly written in the stars, then this summer is about to go supernova . . .

The Summer I Turned Pretty by Jenny Han

Belly measures her life in summers. Everything good, everything magical happens between the months of June and August. Winters are simply a time to count the weeks until the next summer, a place away from the beach house, away from Susannah, and most importantly, away from Jeremiah and Conrad. They are the boys that Belly has known since her very first summer—they have been her brother figures, her crushes, and everything in between. But one summer, one terrible and wonderful summer, the more everything changes, the more it all ends up just the way it should have been all along.
(plus It’s Not Summer Without You and We’ll Always Have Summer)

The Summer of No Regrets by Katherine Grace Bond

This was the summer that would change my life.

So when Luke came into my life, I decided to keep him a secret. Maybe he as a dead-ringer for notorious Hollywood bad boy Trent Yves. And it was possible that everything he told me was a lie. And yes, I was probably asking for trouble. But all I saw was Luke—sweet, funny, caring—someone who would let me be the real me.

But which was the real him?

According to Anna’s best friend, Frankie, twenty days in Zanzibar Bay is the perfect opportunity to have a summer fling, and if they meet one boy every day, there’s a pretty good chance Anna will find her first summer romance. Anna lightheartedly agrees to the game, but there’s something she hasn’t told Frankie–she’s already had her romance, and it was with Frankie’s older brother, Matt, just before his tragic death one year ago.

Twenty Boy Summer explores what it truly means to love someone, what it means to grieve, and ultimately, how to make the most of every beautiful moment life has to offer.

Lori can’t wait for her summer at the lake. She loves wakeboarding and hanging with her friends—including the two hotties next door. With the Vader brothers, she's always been just one of the guys. Now that she’s turning sixteen, she wants to be seen as one of the girls, especially in the eyes of Sean, the older brother. But that’s not going to happen—not if the younger brother, Adam, can help it.

Lori plans to make Sean jealous by spending time with Adam. Adam has plans of his own for Lori. As the air heats up, so does this love triangle. Will Lori’s romantic summer melt into one hot mess?

What are some of your favorite YA books that take place during the summer?
Email Post
Labels: Summer Reads summer vacation Summer YA