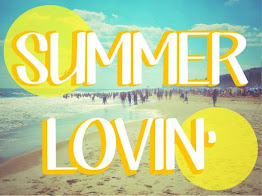 This month we’re talking about summer vacation, and what would summer vacation be without a tale of summer lovin'? I had my first crush at the beach. Well, not the beach. Not even a lake or a river, but water was involved. Both my parents worked and to keep us occupied in the summer, Mom would drop me and my sister off at the local wading pool for the day, armed with a towel, several books, a dollar for the ice cream truck, and a couple of Fluffernutter sandwiches for lunch (more on that later).

The wading pool was a giant circular concrete thing and only about 3 feet deep in the middle. Nothing exciting, except for the mob of kids from all around the city who would come and hang out there on hot days. Including Joey, the boy who would become my first love. He and his brothers came to the “Whirlpool” (as we called that murky circle of dirty water) a couple times a week, driven by his mother in the family station wagon. I was twelve, he was thirteen going on fourteen, had blond hair like Luke Skywalker, and he laughed at my jokes. How could I not fall for him?

We played the perennial summer water game Marco Polo (hard to do in such a shallow swimming hole!), hung out with the other kids on the picnic tables, shooting the breeze, and one time, Joey kissed me behind the nearby baseball field’s equipment shed. My first kiss. And though that kiss was wet and sloppy and he mostly kissed my nose, to me, it was *the* most beautiful and perfect kiss ever kissed.

That summer, like the song from Grease, “Summer Lovin’,” I had me a blast. But also like the song, it turned colder. Summer ended. School started. Joey went to a school on the other side of the city, and we parted. I never saw him again and with the way memory works, I’m not even sure his name was Joey. But I do, and always will, remember that kiss and his Luke Skywalker hair and the excitement and breathless anticipation of young love, first love, and those magical, endless days of summer.

Now, for those of you wondering what the heck a Fluffernutter is, let me introduce you to the delectable lunch of my childhood: take two slices of sandwich bread, add a heap of peanut butter, and a healthy dose of marshmallow Fluff (basically softened, gooey marshmallows, courtesy of the 100+ year old Marshmallow Fluff company of Lynn, MA). Squish the bread together for the most heavenly (and, not gonna lie, super sweet) sandwich you’ll ever eat!