John Clark in what used to be cool Maine, spilling the beans on summers in Vacationland. Way back when, summer consisted of spending as much time in or on Sennebec Lake as possible. There were days I was in the water so much prunes were jealous. Then I bought a ten foot wooden row boat and got up before dawn and spent the entire day fishing at various spots around the lake.

When I was twelve, I did what most other kids in town did, I raked blueberries for money to buy school clothes. It's one of those jobs that isn't for everyone. You're bent over most of the time, so much so that when you get home all you want to do is whimper and pray for a rainy day so you don't have to work. After a couple years of it, I wised up and started working in the plant that processed the berries. It usually meant twelve hour days, but it was a lot easier on my back.

Summers back then also included trips to Old Forge New York where my maternal grandparents were gate keepers for a huge private estate, a memorable 4th of July at Normandy Beach, NJ, three summers painting a now replaced draw bridge over the Kennebec River in Bath, Maine, working in a limestone quarry, an oceanside plant that processed sea moss into carrageenan. (that resulted in walking pneumonia), driving a motorcycle into an elm tree, a car into a lake, and three days at Woodstock. In sum my early summers were anything but dull.

These days summers are a bit more sedate. They involve taking my three grandkids places. Last Saturday, we took two year old Gemma to watch the Portland Sea Dogs, the AA team of the Red Sox. We took eight year old Piper to a play at the Theater at Monmouth and three year old Reid to open swim at the Alfond Center where I swim for two hours five mornings a week. 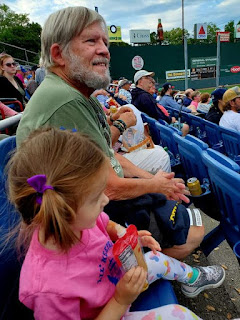 With the easing of Covid restrictions, Maine libraries are finally having book sales again. I love me a good library book sale. I get great stuff to resell online and the library gets my money-a win win. I've hit seven this summer and had a blast. 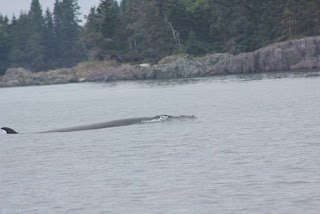 Summers these days also mean our annual week at Cobscook Bay Cottages In Perry. Washington County is my favorite place in Maine and we rent the same cottage every summer. It's right on the ocean, has no internet, phone, or electricity (fridge, lights and stove run on gas), and is within easy driving distance to Eastport, Calais and Lubec as well as more hiking trails that you can imagine. Beth kayaks while I read and think about what to write next. We both take lots of photos. She looks for scenic ones, while I look for the unexpected. 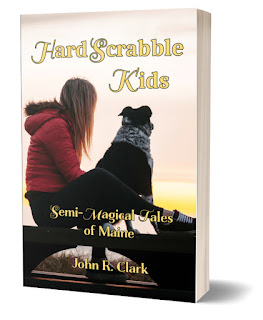 Then there's writing. After ten years of fiddling around, I polished and have published Hardscrabble Kids: Semi magical tales of Maine. I also finished the rough draft of a YA alternate Universe book I'm calling Over the Edge. It's about a teen whose super religious parents throw him out of the house in a February blizzard and when he's hit by a snowplow, he lands on a ravaged planet in another universe.

Okay, teach, I'm done with my what I did, etc. essay. Can I go to the cafeteria? I'm starving.