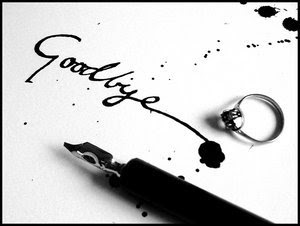 That, my friends, is the number of words and corresponding number of pages I cut yesterday from a manuscript.

I know in YA writing, this can almost be the equivalent of an entire book. But because this is for one of my women's fiction manuscripts, it's closer to half of the manuscript. The entire second half, to be precise. Chapters 14-30, gone with one push of the Delete key. This wasn't just killing a darling or two, this was a flat-out massacre and yeah, I was a little lightheaded afterwards.

No, I didn't really delete all of it-- it's saved in its own document at the moment and parts of it may return to the finished product in some form, but for the moment, consider it gone (along with one of my favorite characters ever—gone, whole cloth, and I'm not sure how to bring him back. *sob*). Yes, I had a drink afterwards. And chocolate. Also kept the Tums handy. Have a feeling I'll be needing those a lot in the coming months.

So, why did I do this? Because the second half of the book was wrong. Don't get me wrong, it wasn't bad, it was just wrong. Or as my Lovely Agent put it: "You wrote two different books."

See, this book has had something of a twisting journey. (I know, don't they all? But still.) I came up with the idea over four years ago and started working on it three years ago. Because of other projects (namely STARS) and moving cross-country, I wasn't able to work on it in a steady fashion, the way I'm accustomed to, so there were a lot of breaks in writing this one. Plotwise, it also took a lot of left turns to Albuquerque, the characters and storyline really busting away from what I originally had envisioned, which had me twitching madly, since that was the first time that had ever happened to me. Perhaps because of all the twists and turns and the pauses in writing, my normal pattern of writing a few chapters, then sitting down to outline the rest of the story, chapter by chapter, didn't happen when I expected. It wasn't until Chapter 14, as a matter of fact, that I felt I had enough of a handle on the characters and rest of the story to sit down and write that outline. Yeah, that Chapter 14. See, a big writing break had occurred after I finished Chapter 13—I didn't work on the manuscript for nearly three months and when I went and picked it back up, I think I made myself write that chapter-by-chapter outline for the primary reason of trying to get back into the groove of the story and that's when the kerfluffling began.

See, not only did the story take a massive turn with the plot, but the tone of the writing and the character focus shifted completely— a real trick, considering that the entire story is told from a single POV character—hence leading to the whole "Two different books" comment from my very patient and voice-of-reason agent. (And lovely. Did I mention lovely?) My main character essentially went from active protagonist to observer/narrator of someone else's story, which obviously, was not at all what I intended.

I can see all of this now. Four months after finishing the manuscript. However, four months ago? Not so much. Nope. Four months ago, I was a combination of relieved, proud, and downright giddy that I had finally finished this four year journey. I was convinced it was the best thing I had ever written. (Parts of it are.) I was convinced that here was my entry into the world of adult fiction. Finally.

And let me be clear, this isn't simply my agent. No, because my agent is a smart cookie, she had two other outside readers take a look at it and they both said the same thing: "Two different books."

So, I'm now at the beginning of a long process and what feels like kind of an endless road at the moment. Starting with identifying where things went pear-shaped (There's Chapter 14 again) and brainstorming how to bring the story back to where it should be. Then there's the whole rewriting thing. This is where I should pause for a moment and mention my equally lovely and patient Critique Partner, who's been listening to me wailing and gnashing my teeth and bouncing ideas back and forth with me. She also felt bad because she didn't see where things went wrong because she'd been just as close to it as I had and of course, that whole taking three years to write the thing issue. Truth is, while it might have saved a lot of pain and work, the issues now so clearly evident within the manuscript weren't really going to reveal themselves until a) it was complete and b) an independent observer had taken a crack at it. C'est la vie, right? Not that I'm really all that blasé about it, but I'm trying to accept it for what it is. A teaching moment. The book, as I finished it, proud as I might have been for fighting through all of the obstacles it presented, was never going to sell. The first half was good, the second half was good, they just weren't halves of the same whole. Painful lesson learned, but better to have discovered it now, than to have racked up rejection after rejection with vague, "Not for us at this time," excuses, right?

So why am I babbling on about this, other than using it as an outlet for my whining? (And believe me, I'm whining. A lot. Doing the right thing? Sucks, sometimes.)

Two reasons, really. One, to underscore the importance of people who will be stone-cold honest with you, no matter how hard it is. Do not underestimate how important this is. We're in an industry where people either play the "Nice Kids Game" or say you suck, without any justification. One might make you feel great, the other like something that should be scraped off the bottom of a shoe, but neither is particularly helpful. What helps is honesty and open discourse. On both sides, because it doesn't help us, as creative people, to stick our heads in the sand and be all tortured artistes and "Oh, but my fragile ego!" Well, at least, not for me. I'm far too paranoid that people would be blowing smoke up my ass, so I'm constantly pulling my head out of the sand and God help me, asking people to be honest, even if it's hard to hear. In the end, my agent, she didn't know quite how to say, "You've written two different books," in a way that would take the sting out, so she just up and said it. She trusted that I'd be grown up enough to hear it and do what needed to be done, whether that was scrapping the project altogether (tempting, believe me, once I realized what was necessary) or rewriting.

So honesty is the first reason. The second is a little bit of a soap box, of-the-moment thing that I'll use as a reminder every time the waiting gets to me and I feel impatient with traditional publishing. If there's anything I've learned from this experience, it's that I should never, under any circumstance, ever self-publish. Maybe other people are just better than I am at judging their work or whatever, but can you imagine what would have happened if I'd self-pubbed this story? I mean, hey, I'd been working on it for three years and polishing along the way and it's deep, man, and the characters suffer, but are ultimately redeemed and it's so ready to be out there and people will love it and I deserve some validation and recompense for all the time I've spent working on it and... and.... yeah.

*pauses to let the horror sink in*

Look, I'll be honest. I would've been mortified. I couldn't have yanked it down fast enough if that's even an option. And even if it is, we all know how things are on the internet. Once it's out there, it's out there forever and it would have followed me around and really, with some distance, is that story one that I want standing as representative of my work?

So it's my own cautionary little tale. I'm not saying it should be for everyone, but for me? Yeah, would not work. The immediate gratification is cool, sure, and God knows, after more than three years of work, I really, really wanted it, but I need an editor. I need an outside eye. I need people to be honest with me. Most of all, I need time. So for now, it's time to say goodbye to the original version of this story and start over at Chapter 14 and try to make it right.

And because I have music for every occasion, Chris Botti, playing "Time to Say Goodbye."

Posted by Barbara Caridad Ferrer at 11:09 AM