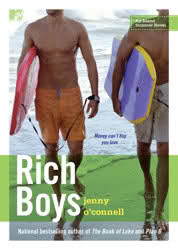 If you’re an author, books are kind of like kids. You spend a lot of time trying to make them good so they’ll go out into the world and be enjoyed by others. When you’re in the middle of forming them, it can be fun and it can be frustrating and sometimes you just want to throw your hands into the air and give up. But the thing is, you (hopefully) love all your books equally for their own reasons. But I don’t.

I have a favorite book of mine. It’s a book that just, for some reason, I really love. Not because it was easy to write or it was my first, but because I love the characters and I love their story. It may not be the book that my readers love the best, but if I was ever asked to name my favorite book that I’ve written I’d say it’s RICH BOYS.

I would also say that it is the worst title of all my books, which is kind of like realizing you named your favorite child Horace after some great uncle in hopes he'd leave your kid that valuable watch collection. The title SO doesn’t do the book or the story justice. And the cover, while I don’t mind looking at it, makes no sense – sure, the story takes place near a beach during the summer but it’s really only about one guy, and he doesn’t surf or boogie board. I wish the book had a different title (unfortunately, I didn’t name it) so people wouldn’t assume that it’s a vapid novel about rich summer people and superficial guys. And it bums me out that readers might look at the cover and pass over the book just because of the title and cover. And I wish I'd come up with a title so I wouldn't have had to look at my publisher and say, "Um, yeah, sure, call it RICH BOYS"... even though I hate it because I have no brain cells left to come up with a decent title!!

So, when it comes to my books, I’m guess I’d be considered a bad mother because I actually have a favorite. And I feel badly that my favorite is dressed in such a terrible cover. Fortunately in real life I still like my kids’ names and still don’t have a favorite. And neither are named Horace.

What about you writers out there? Do you have a favorite book of yours? And why do you like it best?
Posted by J OConnell at 1:42 PM