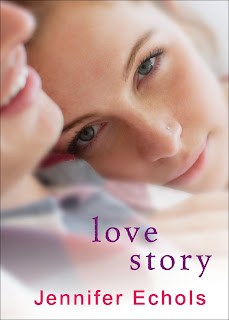 A couple of days ago, I sent back the final proofs of my YA romantic drama LOVE STORY, which will be published on July 19. I removed a towel that suddenly appeared for no apparent reason on page 79. I changed all the baba ghanoush to mulligatawny and YES this was very important to the plot, trust me. But mostly, I read my own book and marveled at how awesome it is. I do not consider this having a big ol' head. I consider this writing the book I want to read. I know some people don't like YA romantic dramas. They won't like this book. And some people who do enjoy that genre won't like it either. Because they are crazy and have poor taste. Happily, it's a little hard for me to care about that, because I think I have done a very good job.

HOWEVER, if you had asked me about this book a year ago, when I had first started writing it, I would not have been as confident. Before I wrote it, I had to send a summary to my editor. The summary sucked. It was stupid and trite and immature, and my editor's comment was, "Can you make this a little less Saved by the Bell?" I am very glad that I managed to do just that.

Now I'm writing my YA romantic drama for release in July 2012, Such a Rush, which until last week was titled Free Falling, because I can't even get the title right the first time through. This book also had a stupid, trite, immature summary, and I am working very hard not to write the book the way I said I would. Next I will write Double Date, my YA romantic comedy coming out in December, and WOW, that is a doozy of a stupid summary. I never had to write a summary for Going Too Far because my editor told me I could write whatever I wanted for my next book, but if I had written one, it would have been stupid. That book is about a 17-year-old girl who falls in love with the 19-year-old cop who arrests her. In its original incarnation it was about two teenagers who do a ride-along with an adult cop for a school report. WHAT? I know. THAT'S STUPID. I told you.

But my most stupid summary is for The Boys Next Door, one of my very favorites of my books (which is saying a lot because, as I have said, I love my own writing). The book is about a love triangle involving a girl and the two brothers next door. She wakeboards with them and works with them at their parents' marina on a beautiful, sunny lake like the one where I grew up in Alabama. Originally they had to work together on some kind of wakeboarding show as a fundraiser to SAVE THE MARINA, which had fallen on hard times financially. It was like some horrible saccharine after-school special. You could almost hear the lame rock song playing three-fourths of the way through as the characters are shown practicing their wakeboarding routines and high-five-ing each other in preparation for their big day. Barf!

If I were just starting out as a writer, I might be concerned about the stupidity of Such a Rush at this point. But I have written enough, and taught enough college-level writing classes, and taken enough classes on how to teach writing classes, to know that writing is a process, not a product. It's a process of discovery. We write in order to know what we want to say. At least, that's true for me. Some writers do seem to know exactly where they're going before they get there. I wish I were one of them, because the publishing industry is set up for them, those royal, lucky people who write great summaries and sell a series of three books for hundreds of thousands of dollars on the basis of a few pages. But I am not. I am doomed to a writing life of finishing entire books to send out to publishers, rather than short summaries of potential books. Not all of those books I write are going to sell, which means I am going to waste a lot of time writing books that will never be published. And I have wasted a lot of time writing a lot of unsold books already. I know it, and now that she has read the summary of Such a Rush, my new agent knows it. But I am 100% confident this book is not going to be stupid when I finish, and that will have to be enough.

Are you one of those lucky people who can write bright, shining summaries that turn into the same bright, shining books? Did you sell your soul to the devil for this privilege? I am curious. Also I hate you.
Posted by Jennifer Echols at 9:44 AM