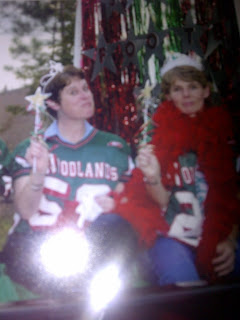 When I began writing what would become DREAMING ANASTASIA, my son was playing football. High school football in Texas is basically a religion. Take out the modifier. It is a religion. That fall was sort of a blur --I wrote, I taught, I went to football games, I hosted the O-line for dinners. I rode the mom's float at Homecoming. We met before to plan our outfits: you wore you son's jersey (I'm the one on the left) along with a tiara and scepter and red boa. My hair then was very, very short. It seemed the thing to do. Truth? I was living my kid's dream, not my own.

Fast forward. I signed with my agent. She sold DA. After some serious delay - an entire year extra until Sourcebooks was ready to launch their Fire imprint for YA -- I was an author. With a book on a shelf. But before that some changes had occurred. For one, I'd grown my hair. I can't fully tell you why -- but it seemed to come with the new me. Or rather, the old me, who'd loved her long hair and then chopped it off for the practicalities of suburban mom life. When you change your life, you change your hair. At least I did. The photographer who took my author photo (below on the left), was one of my former assistant principals. He had started a photography business out of his garage. his dogs were barking and I told him to put me in the best light possible, so he climbed a ladder and banged his head on the ceiling so he could find a flattering angle. I'd actually shown him Cyn Balog's author photo -- she is tall and blonde and, well, not me. He did the best he could! 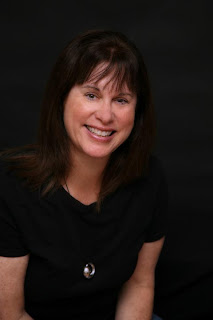 Mostly, though, as many of my Outside the Line gang has mentioned, I prefer the candid shots. This is me at Moonshine Grill last April during TLA. Sourcebooks threw a cocktail party and somehow amidst the cocktails, I ordered what I thought was a slice of pie. As you can see, it was not. Notice how I virtuously added a glass of water? By the time this picture was snapped, my life had changed in more ways than I can count.

As for the red boa in the first picture? My critique group uses it now. Every time someone sells a book or article, we pass along the boa. (We also sneak cookies and occasionally festive beverages into the library, but shhh... I did not tell you that)

I'm thinking it's actually time to snap a new author photo and I have no idea yet what I want. But I'll probably go back to my friend Marshall -- still snapping photos, mostly of wedding parties -- in his garage and see what we can come up with. 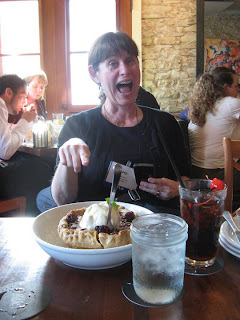