Like most authors it seems, I hate getting my picture taken. We've taken countless family trips where it looks like I wasn't even there because I'm artfully dodging the camera by always being behind it. 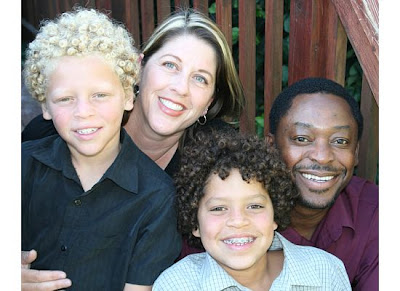 When my picture book WHEN IT'S SIX O'CLOCK in SAN FRANCISCO came out, my publisher wanted a family shot for the flap. My family is multicultural like illustrator Randy DuBurke's and they thought it would be cute to have both photos on the book. I said I'd do it if Randy would (thinking that he wouldn't), but he said okay. Our family photo was taking out on our back deck by my friend Michelle and her big camera. Surprisingly, the kids lasted for almost 1/2 an hour before they started messing around and we got some good shots. This is the one that ended up on the book jacket along with Randy's and yeah, it looks pretty cute. The boys are teenagery now so its nice to remember back when they were still adorable back in 2006.

When I started writing YA, I figured a picture of my kids wouldn't help sell the book, so my 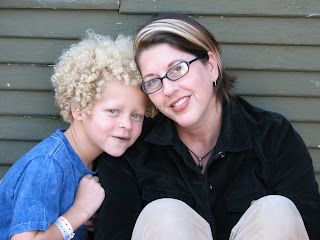 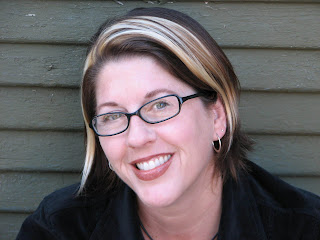 hubby and I took some shots in the backyard and this was the result. The other one is an outtake, but it's so darn cute I couldn't resist. That hair! (And the blue lips, the result of a blue ringpop I have no doubt.) 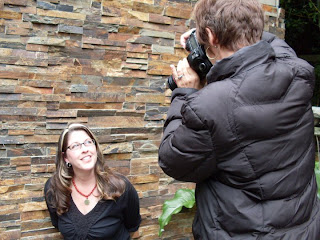 I have a book coming out in 2012 and another one in 2013, and honestly I was tired of looking at the old photo, so I figured it was time for some new ones. It always helps to have talented, multitasking friends, and I'd scheduled a writing retreat with my writer friends Robin Mellom and Eve Porinchak. Robin often helps her husband with his amazing wedding photos, and brought along his magic camera. The last morning of the retreat, I tried to chicken out - I wasn't feeling it, the weather was bad, etc. She dragged me out onto the patio of our rented house and took some photos that I not only didn't hate, I actually kind of like. As a bonus, Eve took photos of Robin taking my photos so we have a sort of circular documentation of the event.

Whew! Hopefully I can keep this author photo for awhile, as long as I don't cut my hair or get new glasses.
Posted by CJ Omololu at 9:00 AM