What Luck Is Made Of (Holly Schindler) 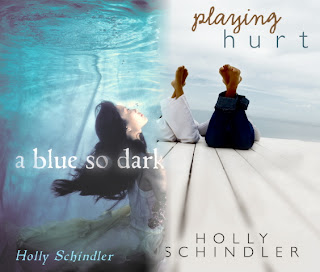 We all use that word often, as writers—luck. We use it because so much is out of our hands. Because it always feels—especially during the submission process—that it takes a certain amount of luck to get a writing career off the ground.

I suppose, if anyone was ever going to say they were unlucky, it could have been me, during that search for my first yes—after all, I spent seven and a half years seeking my first publishing deal. Seven and a half years. In that time, my friends from college finished up PhDs, started teaching, doing research, became professionals. I often felt like all I had was a deep gash in the drywall where I’d spent months upon months banging my head against it. And rejection slips. Hundreds upon hundreds upon hundreds of them—more than a thousand in all.

Still, I remained optimistic. (After seven and a half years, it was either be optimistic, or go all Sylvia Plath!) I was sure my luck was going to change.

Enter the holiday season of ’08. That’s when my YA, A BLUE SO DARK, was under submission at Flux. I spoke to Brian (Farrey, acquisitions editor at Flux) for the first time just before Thanksgiving, and though I tried to play it cool, I spent Christmas on pins and needles, tied up in knots, hoping that finally the acceptance I’d been working toward for so long would appear.

Appear it did, just a few days after the new year. And literally two hours—I swear it’s true—two hours after I accepted the offer from Flux, the phone rang. On the other end of the line was an agent who was raving about a middle grade book I’d sent earlier that fall. With an offer of representation.

I accepted (Deborah Warren later sold my debut MG, THE JUNCTION OF SUNSHINE AND LUCKY, to Dial, and is still my agent). After that initial phone call, though, in the winter of ’09, I just stood in my kitchen, dazed, wondering how it could have happened. Seven and a half years I’d been seeking a book deal, seeking representation. And in the course of two hours in one day, I had both.

The thing is, though, I can’t attribute that incredible day to holiday magic or to elusive good luck. That day is the result of hard work. Period. That day happened because I really did read every single one of those thousand-plus rejection letters (more than eighty of them were rejections for A BLUE SO DARK). Painful as it sometimes was, I didn’t just toss those rejections in the trash, insist I was right, and continue to submit the same book over and over. I digested the critique and I dove back in, revising before submitting again.

For the most part, I really think that’s what luck is made of: the ability to recognize your own shortcomings, the willingness to listen to advice, and the sweat of some insanely hard work.

Posted by Holly Schindler at 8:22 AM