Skip to main content
Posted by Margie Gelbwasser May 28, 2015

Growing up, I knew I was good with words. I wrote story after story--when I should have been paying attention in class, when I should have been sleeping, when I had free time and when I didn't. My stories saved me. As a teenager, I could put into story format what I couldn't say out loud. My dream was to be a published author, and whether they were close friends or acquaintances, everyone knew that was my thing.

But if you asked if I was artsy or creative, I'd say no. Building a world with my words was one thing. Creating something with my hands? Quite another. I don't know when I first decided I couldn't paint or draw or sculpt, but that self-fulfilling prophecy followed me around to the point that I wouldn't bother trying. It didn't help that when I took sewing classes in middle school, I barely scraped a D.

My ineptness was further confirmed a few years ago when I thought it would be fun to try knitting. I'd recently had a baby and thought it would be awesome to knit something for him. Plus, it was the hot trend. Everyone was doing it, including Russell Crowe, Ryan Gosling, and David Arquette. I had visions of making booties, a hat, a scarf, a shawl. The teacher sat with me for ten minutes, her frustration growing by the second. Finally, she (literally) threw up her hands and said she couldn't teach me. She also said I was the worst student she'd ever had. I tried to say the problem might be that I was a lefty and she was a righty, so I couldn't hold the needles the way she explained. But she said no. It was just me.

I told this story often. A big part of me found it funny, but a small part was sad. I wanted to learn to do something with my hands. I wanted to be artistic. This year I got my chance, thanks to another hot fad: PaintNite. It's this thing where you go to a restaurant (or wherever) and everyone makes the same painting, under guided instruction. My first painting came out better than I expected. The second wasn't too bad either. My third was my favorite. It didn't look exactly like the teacher's, but I liked it more. I was excited I finally learned how to properly mix colors and proud of myself too. That painting (see below) is now hanging in my family room. In fact, I got so inspired, I bought pastels and am going to try to make some other pictures. Left totally to my own devices, the next picture could be a mess, but in the words of Melissa Lawson, "What if it all goes right?"

My painting success inspired me to try sewing. Before starting classes, I told the teacher my knitting story and tried to shake off my lack of confidence. And guess what? This teacher was AMAZING. I was able to follow her directions and make a pin cushion. I don't know if anyone has ever been this proud of a pin cushion before. Unlike my 8th grade debacle, my work with the sewing machine was not a disaster. This teacher even asked if I'd used this kind of sewing machine before.

So, on the topic of change and growth, these experiences taught me not to be afraid of trying new things, that positivity goes a long way, and that the only way we can keep getting better at something is to keep trying. 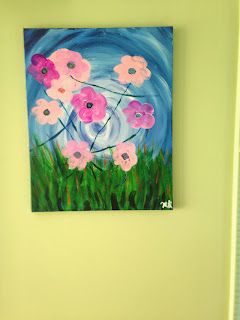 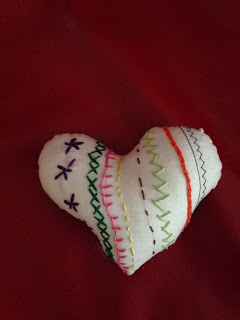 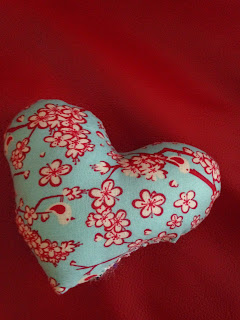