Skip to main content
Posted by Jen Doktorski May 23, 2015

Romulans, Semisonic, and the jumbled mess that is both spring and my blog post

May has always been my month for spring awakenings and growth—whether I was ready for it or not. It’s when I graduated from college. Met my husband. Became a mom. Published my first book.
These seminal events were wonderful, joyous, and exciting but at the same time, they were also tinged with a smattering of sadness, apprehension, and straight-up fear. When I left Penn State I had to say goodbye to the cosseted world of eighteen to twenty-two-year olds and my prolonged adolescence and get…gulp…a job. When I met my future husband, I had to drop the tough-girl act and open my heart. (The Romulans had an easier time convincing Captain Picard to lower the Enterprise’s shields.) When I had my daughter, I had to face the terrifying realization that my heart no longer belonged to me. I had gratefully and willingly given it away to this tiny human being who was astonished to discover that she had feet and, yes, if she tried hard enough, she could chomp on her own toes. When I published my first book, I had to allow strangers—some of whom were only a mere mouse click away from a one-star review—to judge the stories and characters that up until then had only belonged to me and a very select group of people.


All of this scared the crap out of me. Beginnings scare the crap out of me. That’s because they’re intrinsically tied to endings. “Every new beginning comes from some other beginnings end.” Perhaps I could have dug deeper for a more literary quote, but at the moment, the 90s band Semisonic is all I’ve got. In fact, that song lyric has been bouncing around in my head since I knew what we’d be blogging about this month. 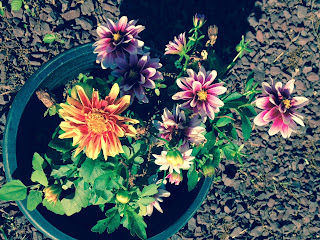 I planted these flowers in front of my house at the beginning of April. Since then, the originals have died and new ones have bloomed. On this one plant alone there are decaying flowers, full blooms, and new buds waiting to open.
Spring is such a complex and unsettling season. It’s moodier and harder to pin down than the others. One day it’s 82 degrees, the next it’s 60. Blossoms give way to green leaves and flowers die to produce fruit. Beginnings and endings. Life and death. Hockey and baseball are happening at the same time!!! It’s all a jumbled mess and it throws me.
Earlier this month, in keeping with the May theme in my life, my third YA novel debuted. I’ve been busy promoting my new book, but I’m also stressing about the WIP that I’ve yet to finish, and trying to decide what to write next. Reading the posts of all my fellow YAOTL bloggers has given me some great ideas. I’ve added to my reading list, looked into some summer writing courses, and thought about taking the summer off from writing to fill the well.
During a recent blog tour, one blogger asked me to finish this sentence.
If I could write just one more book, I'd write.....

I didn’t know how to finish it. Do you? But it gave me something to think about.


Sometimes growth is tied to big, life-changing events, and sometimes it happens in smaller, imperceptible increments. Spring is about big awakenings and changes, but the slow ones? That’s what summers are for.
Email Post