I was almost tempted to do a post on author talks, signings, etc., but that wasn’t the sort of appearance we YAOTLers agreed to discuss.


Always a bit of a puzzle. Books are so often about the main character going from ordinary to extraordinary. Readers need, thus, to identify with the everyday type presented at the beginning of a story. Perfection, physical or otherwise, doesn’t leave much room for transformation. Still, we like our main characters to be (or become) a better version of ourselves. And sometimes, yes, there’s a physical component to that.


So there’s a balance to be struck. I find it useful to physically describe my protagonist via interactions with others. More importantly, to vary the opinions. In my STORK trilogy, I had the school’s queen bee scorn my new-to-town protagonist, Katla, her fashion sense in particular. At the same time, others—her soon-to-be best friend, Penny, for example—were enamored by Katla. This ambiguity leaves room for the reader to form their own opinion.


I also try to introduce or reinforce certain individual traits—Katla’s white blond hair, for one—via secondary characters. As an example, Jaelle, a waitress in town, gives Katla a distinctive nickname.


“Hey, Ice.”
The first day we met, back in the summer, Jaelle had taken one look at my blond hair and proclaimed it ice-white. And as far as I could tell, Jaelle didn’t give out nicknames easily.


Given Katla’s connection as a human Stork to the white bird as well as my use of the concept of  a white witch, I had wanted to highlight Katla’s white blond hair. The nickname, compounded by the fact that Jaelle didn’t overuse them, accomplished as much. That was my intent, at any rate.


I was a little surprised when some bloggers and reviewers of Stork were annoyed with Kat’s fashion obsession. She is an aspiring designer and, admittedly, way into names and labels. She’s also a little daring or out there in her own fashion sense. This, too, was intentional. She’s an L.A. girl who’s recently been relocated against her will to northern Minnesota. Yes, upon arrival, she’s dismissive of her new classmates and the local styles (or lack, in her opinion, thereof). Yet, some of her own outfits are a little, well, unusual. She receives as many odd looks as she gives. Again, my intention was to allow room for the reader's interpretation.


By the end of the book, she has an appreciation for her new friends and their economic situations. Moreover, she elects to wear a vintage dress to Homecoming, something she wouldn’t have even considered when new to town. It is one measure, among others, of her personal growth.


I’m often asked if, given Kat’s flair for style, I’m into clothing. The answer is no, not really. I like to look presentable, but I’m also budget conscious. I had to research designer names much as I had to research the names of Norse gods. 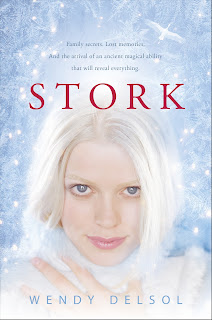 As to the cover—a close-up, full-face representation of Kat—I love it but will admit that the model is slightly prettier than the Kat I’d imagined. The luxurious fur trim she’s clutching to her throat, however. Oh yeah, that’s her. Though I’m sure she’s paired it with ripped jeans and big, clunky motorcycle boots.


A final note about the other variety of appearances: I was recently at the Mecca of the book world, Book Expo America (BEA). For a small taste of the BEA experience, visit my blog, or those of my fellow YAOTLers:
my blog: http://www.wendydelsol.com/bea-2012-recap
Joy Preble: http://joysnovelidea.blogspot.com/2012/06/me-and-bea-or-next-time-i-wont-spill.html
Kimberly Sabatini: http://kimberlysabatini.com/blog/2012/06/bea-2012-a-recap-in-pictures/ 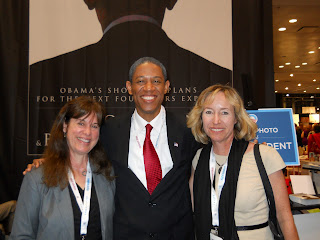 (here's a BEA shot of Joy and me with an Obama look-a-like.)


And, finally, it looks like it falls to me to wish everyone a Happy Father’s Day. I know I snagged a good one for my kids.
Email Post